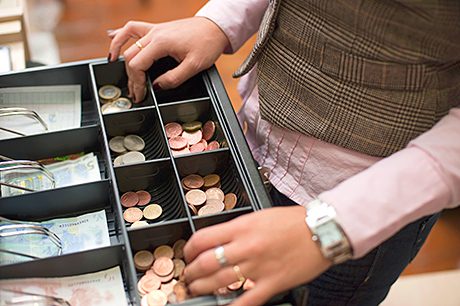 ARE stores seriously affected by criminal activity carried out by staff?

A study published recently by consultancy firm Retail Knowledge, sponsored by a cash security client, showed that insider theft (theft by employees), of both stock and cash, is now among retailers’ top three areas of security concern.
The Volumatic Kount Retail Fraud Survey 2013, said to be the UK’s most detailed report into loss prevention, looked into the concerns of 100 of the UK’s top retailers. It found that along with online fraud and return fraud, internal theft is a major area of concern for retailers and the biggest area of store loss.
Concern about employee theft of stock rose from 18% last year to 27% in 2013. Recognition that cash theft is a problem increased from 11% to 14%.
James Harris, commercial director of Volumatic, said: “Surprisingly, despite almost a fifth of retailers naming the internal theft of cash specifically as an issue to their loss prevention strategy, half of all retailers participating in the survey use no cash security products at the point of sale.”
Paul Bessant, chief executive officer of Retail Knowledge, said: “The survey has highlighted the need for retailers to instil a positive culture of loss prevention and this could prevent the figures rising for another year.
“At a time when the recession and tough economic climate continue to burden retailers, losses of this magnitude are even more unwelcome”.
While problems of staff theft appear to be increasingly worrying retailers of all types, those selling clothing are reckoned to be especially affected and one industry body is now trying to get to a clearer understanding of the problem.
The Retail Loss Prevention Fashion Forum said it took the decision to measure crime in its own sector because its perception of losses seemed to out of sync with the industry norm.
Its findings suggested that although customer theft was in decline and largely in line with other surveys, internal theft was more than 30% of all fashion theft.
But Retail Knowledge was keen to say that the forum’s findings were in fact closely aligned with the Volumatic Kount UK Retail Fraud Survey 2013.
The wider survey did see the biggest area of store loss across all sectors as still being external theft at 30%, but much less ahead of employee theft (at 27%) than previously
The Retail Fraud Survey published also suggested that there may be a general reluctance among retailers to admit the extent of employee theft and reckons the figure may still be under-reported.
“Internal theft is hard to measure as it is something that many UK employers do not like broadcast,” said Paul Bessant. “There may be cultural factors at work here. Preliminary findings of the new US Retail Fraud Survey show retailers in North America to be much more up-front about employee theft. They generally put losses due to staff ahead of losses due to the public”.