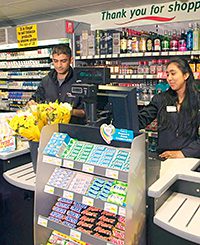 SCOTLAND’S retailers, including convenience store operators, look set to be asked to take confectionery off of displays at till points.

The Scottish Government and the Food Standards Agency in Scotland document Supporting Healthy Choices, described as “a draft framework for voluntary action” calls on the food industry to work in partnership with government to achieve healthier diets for Scottish people.
Among its four core principles the document lists putting children’s health first in all food-related decisions and an aim to “rebalance promotional activities to significantly shift the balance towards healthier choices”.
And the first ‘commitment’ it seeks is that “all retailers and all caterers who stock confectionery remove all confectionery from points of purchase”.
It views those locations as “tillpoints, checkout aisles and areas around checkouts”.
The document comes shortly after the Scottish Government agreed to fund the SGF Healthy Living Programme for another year.
The programme, initiated in 2004, encourages the effective display of healthy produce but has no requirement that members of the programme ban other goods from any area of stores.
Supporting Healthy Choices, will be debated and revised over the summer. Speaking to Scottish Grocer a Scottish government spokesperson stressed that it is a voluntary framework. “The commitment on confectionery is important,” she said. “But it’s not the only strand to the initiative. We are asking the industry to work with us on a number of fronts to address population dietary health. There is a range of other commitments we are asking the industry to make. Beyond that there are still further measures on education, information and getting people active.”
But she also made it clear that change was likely to occur.
“We recognise that these commitments are going to be challenging to some operators but the scale of the obesity issue and poor dietary health in Scotland requires that significant action is taken by everyone, including retailers, now, to start to fix the problem.
“Ministers have made it clear that doing nothing is not an option.”
But proposals to ban confectionery from till points had no support from Scottish Grocers’ Federation chief executive John Drummond.
He said: “They may wish to try but apart from anything else it is very difficult for a small store format to rearrange the layout of the store.
“If you were removing confectionery from a checkout area and in aisles opposite the checkout where would you put it and what would you put in its place?
That’s where it gets difficult. It is not for government to get involved in the layout decisions for convenience store operators.
“It’s an invitation – they are inviting retailers to remove confectionery, but it is an invitation we won’t be taking up.
“There is no condition as yet in relation to the SGF Healthy Living Programme but that may well come and then we will have to debate that at that time, but at this point my position and the position of the SGF is we will not be requesting retailers to remove confectionery from the checkout.”

Image – Could confectionery at till points and adjacent areas be on the way out? Scottish Government draft proposals ask retailers to remove sweets from points of sale.