May 31 was the World Health Organisation’s 2013 No Tobacco Day. One of the world’s biggest tobacco companies wonders if anti-smoking lobbyists have properly thought through the issues 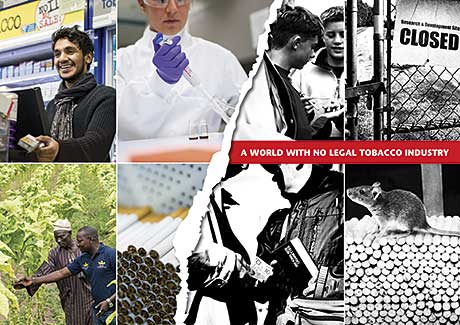 WHAT would a world without legal tobacco look like? It’s a question that British American Tobacco (BAT), owner of Benson & Hedge, and Rothmans set out to answer, from its point of view, on the World Health Organisation’s No Tobacco Day.

Kingsley Wheaton, BAT’s group head of corporate and regulatory affairs, paints a grim picture of lost jobs, criminal domination of the market and children being targeted with cut-price dodgy cigarettes.
“The reality is that people will continue to smoke,” he said. “But instead of buying legal, taxed cigarettes, made by legitimate tobacco companies and sold by reputable retailers, they’ll turn to black market sources to get what they want.”
He continued: “The tobacco industry is highly regulated and sells a legal product. We conduct our business in a professional and responsible way, abiding by the laws in all the countries we operate in, often going above and beyond our legal obligations.”
The criminals who would fill the void left by legitimate operators would not have any such scruples, he argued.
Wheaton reckons that investment in reduced-risk products, responsible marketing and co-operation with law enforcement agencies would all be things of the past.
In their place, he envisages black marketers punting tobacco outside schools, newsagents and playgrounds. Their tax-free cigarettes would be cheaper than legitimate brands, so kids would be better able to afford them.
Those products could, he added, be full of all manner of nasties. “Illegal cigarettes have already been found to contain dead insects and animal excrement.”
The UK exchequer would also lose. The tobacco industry contributed £12.1bn through excise and VAT last year and, he said, it provides employment for over 85,000 people – factory workers, suppliers, wholesalers, distributors and retailers.
BAT’s vision of the world without legal tobacco can be seen at www.bat.com

Is intensifying tobacco regulation the only realistic answer to health dangers of smoking? Or does it just aid criminals?