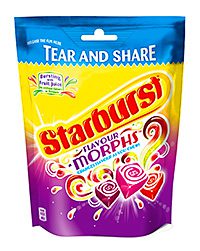 WILLY Wonka would have been proud – Wrigley has created a sweet that changes flavour as you chew.

Starburst Flavour Morphs, said to have already been successful in the USA and Canada, come in three flavour combinations. Strawberry changes to strawberry pear; cherry becomes cherry lime; and raspberry morphs into raspberry pear. The styles were said to have been the public’s favourites during extensive testing.
There will be a £3m campaign including tasting sessions at music festivals. RRP for a 45g single stick pack is 49p; a 152g sharing pouch is £1.28.