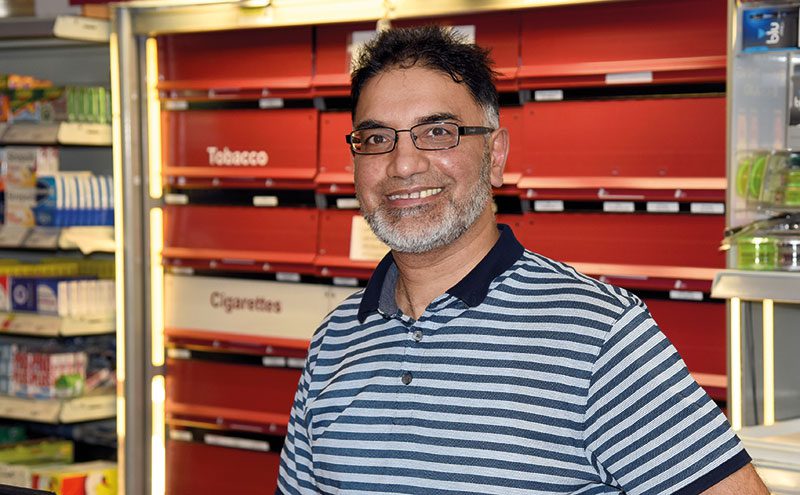 Interview with Akhtar Muhammed (above).

ROSE-tinted glasses to one side, there’s little doubt that when it comes to tobacco sales, the raft of regulations which have been imposed on the category in recent years have left retailers with one hand tied firmly behind their back.

Ask almost any c-store owner in Scotland and they’ll tell you that retailers are severely limited in what they can do, but that doesn’t mean doing nothing is the only option and, at Pricekracker in Dundee, retailer Akhtar Muhammed is determined to keep his sales figures ticking upwards despite the challenge.

Having picked up the Tobacco Retailer of the Year Award at the 2017 Scottish Grocer Awards in March, success was a recent memory at Pricekracker when the latest wave of regulations came into force in May.

And despite Pricekracker being recognised as a cut above in tobacco sales terms, Akhtar admits the store took a bit of a hit when the new minimum pack size rules effectively doubled the price of the cheapest pack available.

“Certainly we noticed a decline after the tens were banned because a lot of customers were coming in for tens,” said Akhtar.

“But now, they’ve got to buy 20s, which does affect the money across the counter.”

Akhtar noted that it wasn’t just his cigarette sales which took a dip in the wake of May’s regulations reshuffle. Other categories in his store were taking a hit too.

“I’m not going to tell a lie, there has been a dip in footfall, but gradually we’re coming back,” he said.

“Because of the slight dip that we had I thought ‘we’re not going to let this go, we’ve got to grasp the business’. So we’ve been doing different promotions, I’ve been trying out new things, we actually spent money on the outside putting new lighting in, making the shop look better in the evening, all these wee things. I’ve seen a difference but it’s been hard work.

“You know, for every ten cigarettes at maybe £4 or £5 that used to go through your till, you’re having to sell a lot of other stuff to get that back.”

What annoys me is the duty-free stuff that’s advertised on Facebook.

Keeping promotions up to date has been key according to Akhtar, particularly with impulse, and the retailer has been making stands by his checkouts work hard, offering promotions from Premier and even teaming up with Mondelez to offer his customers some decent deals.

As for the tobacco itself, while Akhtar said there’s no doubt sales have taken a hit, he reckons the cash & carries, with support from tobacco firms, have been working to mitigate the damage.

“The cash & carries have been doing things, they’re trying to help the retailers as well, they’ve been doing the Carlton cigarettes at 8% margin and Players at 10%. Gold Leaf was more than that, so that certainly helped us because although  we were maybe selling a wee bit less, because of the margins, in the long term, we’re okay,” he said.

Improved margins on some lines is just one of a few silver linings which Akhtar has been able to see through the clouds cast by strict tobacco regulations.

With the binning of 10-packs of cigarettes and roll-your-own packs below 30g, Akhtar said he saw an opportunity to really rationalise his tobacco gantry, leaving only lines that have earned their place.

“Obviously when the tens disappeared we wanted to make sure to sustain that business. We didn’t want to lose people that were buying tens and had to move up to 20s, we want to keep that customer and make sure we have the right lines,” he said.

“It was a good opportunity at the same time because we were clearing everything. Everything had to go so all our dead stock went out which meant our gantry got much more space for the lines that do sell. Certainly yes, I’d be telling a lie if we didn’t say we had a dip but it’s ticking back up slowly.”

In the wake of the regulations changes, there’s been a slight shuffle in top sellers at Pricekracker with Akhtar noticing customers trading down on brands to hit a more affordable price point when purchasing a larger pack.

But with duty being what it is, retailers can really only go so low, and while Akhtar, who works on pricing with supplier Imperial Tobacco, is sitting at a touch below RRP – it’s not low enough for some and he reckons illicit trade is thriving in his area.

“That’s a sore one. I think that maybe, okay, obviously tens were going to be a hit because not everyone has that much money so you were going to see a dip. But what annoys me is this duty-free stuff or the sweepings off the floor stuff or whatever. It’s being advertised on Facebook, they’re sitting at crazy prices.

“It hurts our business, people buying cigarettes at say a fiver a pack. We’re losing not just £5, it’s a lot more than that because they’re maybe buying other stuff so you lose out that way.

“I think the government should do something. They’ve been so blunt in saying, ‘we want to hide the cigarettes, we want to make them all plain packs’. I think they should nip it in the bud wherever they can.

“At the end of the day, government makes more money off of cigarettes on taxes. They make a huge amount.

“What they’re doing is they’re driving people who wouldn’t normally have bought this kind of tobacco to go looking for it because they can’t afford to otherwise, and with all the benefits cuts its that bit tighter as well.”