According to Red Bull’s interpretation of IRI Litmus figures, soft drinks PMPs add 25% more value than plain packs and are driving growth by 6%. 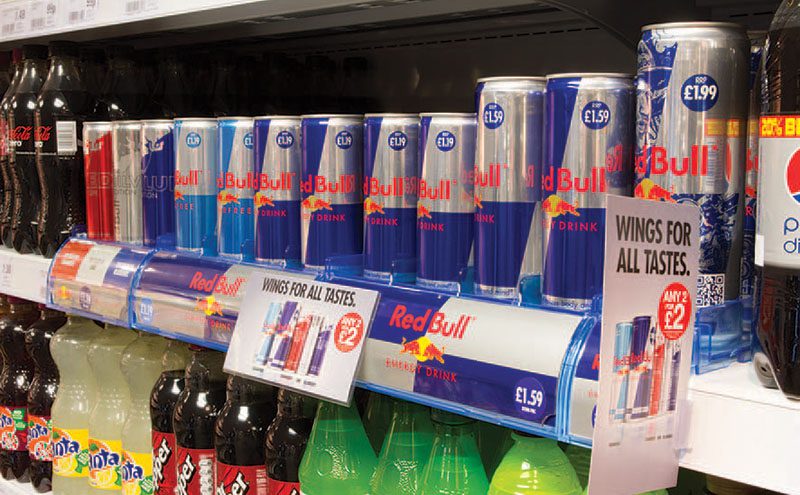 It says 68% of UK shoppers are likely to compare prices and that 44% of shoppers are more likely to buy a PMP if they see one.
Category development manager Rich Fisher said: “Price-marked packs deliver a greater perception of value to consumers, with 76% of shoppers saying PMPs help a convenience store price image  and 38% of shoppers agreeing that PMP’s reassure them that they are not being overcharged.

“Similarly, 21% of shoppers said they wouldn’t buy a soft drink from a convenience store if it wasn’t a PMP  and 22% of convenience store shoppers buy PMPs ‘every’ or ‘most times’ they visit a store.”
Fisher added that in 2016 Red Bull reduced the RRP of its 355ml price-marked can from £1.59 to £1.49 and this led to a 14% increase in sales against the same quarter a year earlier.

21% of shoppers said they wouldn’t buy a soft drink form a c-store if it wasn’t a PMP.

• Coca-Cola European partners says PMPs are an effective way to encourage consumers to try new products, adding that research shows that 43% of shoppers would be more likely to try a new product if it is in a PMP.

Trade communications manager Amy Burgess said: “An irresistible offer can often encourage a shopper to buy an item they had no intention of picking up when they entered the store. Therefore, considering second sightings of PMP offers, for instance, close to the entrance, can help increase their sales.”

• Calling itself the ‘champion of the independents’, Boost says that of the 50 top selling energy drinks, 37 are in PMPs.
And it has made its newest drink available in a PMP.
Protein Boost comes in 310ml plastic bottles in chocolate or strawberry flavour.
Price-marked at £1.29, it is available in an eight bottle case.
A spokesperson said: “Price-marked packs can enable independents to compete effectively by offering a price point in line with retail multiples.”