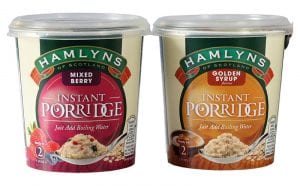 PORRIDGE sales in the UK continue to grow, as the oat cereal’s many health benefits make it the year-round breakfast of choice for health-conscious consumers, says Scottish porridge and oatmeal producer Hamlyns of Scotland.

But these days porridge isn’t just a good way to start the day, it reckons.

Hamlyns has seen significant increases in sales of its instant porridge pots and sachets, as porridge is increasingly used as an on-the-go or office-based breakfast, lunch, or healthy snack. Porridge pots are also very popular with walkers, cyclists and outdoor enthusiasts, truck drivers and site workers who are looking for an energy boost in the middle of an active day, the firm says.

It sees its oatmeal sales also increasing and oatmeal featuring in an increasing number of online recipes posted by foodies and bloggers.

Hamlyns has recently re-launched 500g packs of Hamlyns Scottish Oatmeal in new packaging, designed to be in keeping with the rest of the range. With ‘suitable for home baking’ flashes on the packs, some retailers now merchandise the oatmeal in both cereal and home baking aisles, it says.