Out of the ordinary products will be on shopping lists at Halloween as consumers look for something different, claims Premier Foods.

The Mr Kipling and Cadbury Cake producer says that while ambient cake sales at Halloween have been in decline, Mr Kipling Fiendish Fancies recorded sales of £1m in 2015. 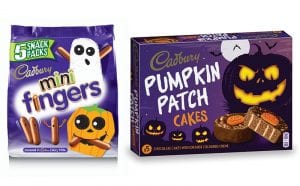 Each Pumpkin Patch Cake comes with a seasonal decoration and they’re available  in packs of five.

Following what the firm said was a successful first year, the biscuits are available in eight-packs, which have an RRP of £1.79.

Head of category and shopper management David Costello said: “Research has shown that over two thirds of shoppers spend an average of £1 per pack on Halloween products.

“With the Cadbury Biscuits Halloween line-up we’re meeting this need, bringing incremental shoppers to seasonal sweet biscuits, and working with retailers to drive shoppers to the fixture ahead of the Christmas period.”