With a new refit, kitchen and the launch of its own in-store town market, Edinburgh retail chain Margiotta is putting fresh food and local brands at the heart of its operation. John McNee found out more.

EDINBURGH retailer Margiotta Food and Wine is celebrating local food and drink with the launch of its own monthly town market at its flagship store.
Extensive refits have recently been completed at all six of the retailer’s sites, introducing new black shelving and décor along with the installation of state-of-the-art chillers and freezers.
Now a variety of local suppliers and traders have been invited to set up stalls in the Dundas Street store to give customers the opportunity to sample their products. It’s part of a new monthly event that owner Franco Margiotta said had been made possible with the introduction of adaptable shelving fixtures.
“Markets are popular, they draw people in and we could always use a bit more footfall, so it seemed like a good idea,” he said. “The trick was trying to create the space out on the shop floor. What we’ve done is put all our shelving on casters, which enables us to move the shelves and create a space for our indoor market, but it will still be possible for customers to continue with their regular shopping.”

The market, which will operate from 10am to 5pm on the last Saturday of every month, will offer fresh produce, sweet treats, artisan foods, and beer and wine tastings. It’s designed to build on Margiotta’s existing relationship with good local and speciality suppliers.
During the refit, Franco said he had tried to rationalise the store’s range, cutting some low sellers and making some room for what he called “more interesting” lines, such as Pip & Nut spreads, Diablo’s range of sugar-free products or Doisy and Dam ‘superfood’ chocolate.
“They’re nice products and quite distinct, the kind of things you won’t see everywhere,” he said. “We get a lot of people who are just starting up, whether they make a pickle or a jam, or whatever they do, asking if we’d like to stock them. Sometimes you’re not so sure, but usually we’ll offer some shelf space to see how it sells. We try many things and some stick and some don’t, but we like to stock as many local suppliers as possible.
“We would like to create an atmosphere where you come in for your regular top-up shopping and then you spot something you’ve never seen before. When you go to a farm shop or a visitor centre, they always have these nice little things that you might not necessarily buy, but it makes you feel good for having seen it. We want people walking out of our shops feeling a little bit better than when they came in.”
He said Margiotta’s range had also been modified to offer more products at ‘everyday low prices’.
“We’d like to be all things to all people,” he said. “You should be able to come to Margiotta without fear of paying over the odds, but at the same time you should get a better quality of product.”

The monthly market will give customers an opportunity to try before they buy, but it is only one component of the company’s new emphasis on fresh food and sampling activity. As of last month, Dundas Street is the first of Margiotta’s stores to be fitted with a hot-food kitchen.
“We have a young chef from Italy who moved over here specifically for this,” said Franco. “To begin with he will just be preparing a lunchtime menu, starting off with some Sicilian street food and pizza al taglio, but within a few weeks we’ll have a full breakfast and dinner menu as well.
“We’ve never done it before. This is all new to us, but I’ve always wanted to do it and I feel the time is right now.”
The store’s licensed area wasn’t physically altered during the refit, but the licence itself was changed, so the area could be incorporated into the plans.
Franco said: “What we plan to do with the space is start having a series of wine evenings, whether it’s a beginner’s class or a visiting wine maker talking about his operation, or just people doing tastings. We’ll have tables and chairs and host evenings of wine and food pairing. There will be talks and sampling. We want something happening all the time.
“In the kitchen we want to provide space for cookery demonstrations, offering advice and promoting cooking, while using some of the products we’ll sell.
“The indoor market will be a monthly feature, but we want sampling to be taking place all the time, creating a bit of interest, without getting in people’s faces. You have to be subtle with these things, but we’re called Margiotta Food and Wine and I think we need to emphasise both of those things as much as we can.” 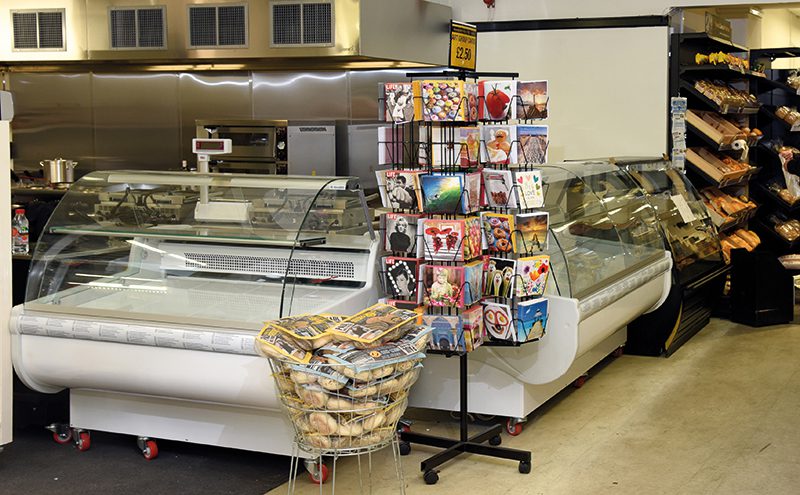