BRITAIN’S  shop vacancy rate decreased to 12.5% in January, its lowest level in six years, according to the latest figures from the Local Data Company.
But while the overall rate for Britain has gone down, the number of long-term empty shops has increased by 26%. And compared to the previous month Scotland  didn’t see vacancies decrease like the rest of Britain. Instead in town centres and retail parks the proportion of shops that are empty north of the border increased slightly.
The January overall rate of  12.5% (meaning one in eight shops in Britain is currently vacant) is the lowest the rate has been since it was 12.4% in December 2009. 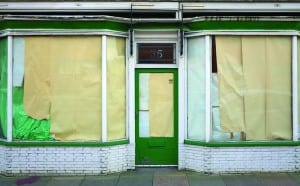 In January this year, the number of vacant shops dropped by 171 and the number of shops increased by 81. Those two movements resulted in the reduction in the vacancy rate. The peak in vacancy rates was 14.6% in 2012.
But the picture varied across the different nations of Britain and the regions of England.
Shopping centre vacancies were down in many parts of Britain.
But the town centre vacancy rate dropped only slightly overall ( by just 0.1%) in January 2016, when compared to the previous month.
The town centre vacancy rate dropped in six English regions and in Wales,  stayed the same in three English regions, but increased in Scotland. However, compared to 12 months ago, town centres have seen a 0.4% drop in their vacancy rate.
On retail parks shop vacancies in January 2016 in Scotland were also up very slightly (by 0.1%) compared to the previous month.
If the general trend appears to be a decline in shop vacancies the number of persistent or long-term shop vacancies is actually on the increase.
Scotland with 4.6% of shops lying vacant for more than three years is on the British average. The north-west of England and the north-east of England are worst hit by long-term vacancies. In both regions 7% or more of shops have been vacant for more than three years and in the English north-east more than one in 10 shops have been empty for more than two years.