Tobacco giants in 11th-hour effort to head off standardised packaging 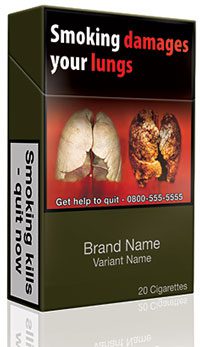 SIX months ahead of the intended beginning of procedures to introduce standardised packaging of tobacco to the UK the High Court in London last month heard the tobacco giants’ legal challenge to the move.
The Standardised Packaging of Tobacco Products Regulations 2015, which are due to begin taking effect from May this year, require all cigarettes to be packed in dark brown or green packs carrying health-warning photographic messages but with no brand logos and with brand names limited in size.
The regulations are set to apply to cigarette packets manufactured after May 2016. If enacted it will be illegal to sell non-standardised packs from May 2017.
The four main supplier companies in the UK tobacco market – British American Tobacco, Imperial Tobacco, Japan Tobacco International and Philip Morris International – say the new law infringes property rights and that the government could be forced to pay hundreds of millions of pounds in compensation if the move is found to be illegal.
Tobacco firms failed in a bid to have the law overturned in Australia but have said they are more confident of success in the UK because here they only need to prove that their intellectual property has been taken illegally.
Other countries, including Ireland, Hungary and France where plain packaging has been approved, are likely to watch the case carefully.
At the December hearing, scheduled to last up to six days, QC for Philip Morris, Marie Demetriou said that the health secretary had failed to demonstrate that the regulations strike a fair balance between public health and the interests of the tobacco companies.
The Department of Health referred to a review by Sir Cyril Chantler in 2014 that said it was highly likely that standardised packaging would reduce the rate of children taking up smoking.
But the companies say that in Australia, the first country to have plain packaging regulations, there has been an increase in sales of black market and low-priced cigarettes but no evidence yet to show that the number of people taking up smoking has been reduced.
JTI has publicly highlighted a decision by the Department of Health in Australia to postpone the publication of a review into the effects of the changes, and says it suggests the Australian evidence could indicate failure.
A judgement from the UK hearing is expected early this year.
Picture health warnings on cigarette packets were introduced in the UK in 2008 and in April last year small shops joined large stores in being banned from displaying tobacco and related products.
In a separate legal challenge brought by Philip Morris International and BAT to the European Union Tobacco Products Directive 2, a preliminary judgement was due on 23 December, shortly after this edition of Scottish Grocer went to press.
Under EUTPD 2, from May 2016 the minimum size pack of ready-made cigarettes will be 20 sticks, the minimum size of packs of roll-your-own tobacco will be 30g, and the space on packs required to be given to pictorial health warnings will be 65%. The European directive also bans the selling of most flavoured tobacco, although menthol cigarette flavours will be legal to sell until 2020.