Sugar-free mint brand Smint has introduced a £1 price-marked pack to its range.
Product manager Shankar Iyer said: “PMPs give shoppers a renewed sense of trust in the brand and it’s a great way for us to expand our audience as well as ensure shoppers are returning to Smint time and time again.” 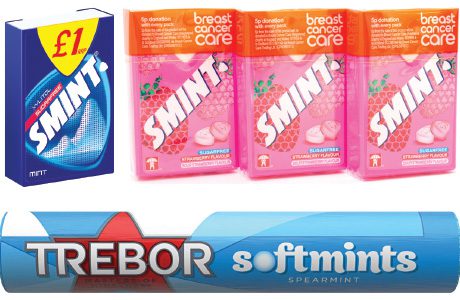 At the same time, brand owner Perfetti Van Melle has announced that a donation will be made to Breast Cancer Care from the sale of each pack of its Strawberry Mix line.
Trade marketing manager Mark Roberts said: “The brand has partnered with Breast Cancer Care since 2011 and has already raised over £100,000 for the charity.
“Each year a different flavour is chosen to front the campaign and 2015 sees Strawberry Mix, a new flavour take the limelight.”
Smint will donate 5p from each pack of Strawberry Mix sold.
• Mondelez International is extending the Trebor range with the addition of Softmints Lemon Mint.
Senior brand manager Elena Mallo said: “Trebor is proud to be unapologetically minty and we believe this unique flavoured line extension will intrigue shoppers, and ultimately help drive sales.”
Saying that 70% of spend on mints comes from shoppers who only buy one variety, Mondelez trade communications manager Susan Nash said retailers should stock all Trebor varieties.
“These are Trebor Extra Strong Peppermint, Trebor Softmints Peppermint and Trebor Softmints Spearmint,” she said.
“To make the most of mints and gum, it is important for
retailers to ensure that shoppers see these products in-store.
“Mints and gum are not usually top of mind for shoppers when entering a store and can be easily forgotten.”