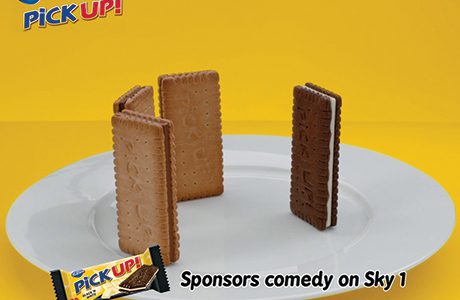 Following a year that owner Bahlsen says has seen it added to the shopping lists of 556,000 UK households, biscuit brand Pick Up is to appear on TV determined to raise a smile.
General manager of Bahlsen Jonathan Duffin said: “Bahlsen has launched a partnership with Comedy on Sky1, sponsoring the new seasons of popular TV shows Mount Pleasant, Trollied, After Hours and Stella, starting with season five of Mount Pleasant on Fridays at 9.00pm.”
He said that over the most recent 52-week measured period, Pick Up has become a £5.7m brand and shoppers had increased their buying frequency of the brand so that the brand’s market penetration reached 4.4% in August this year. Bahlsen overall showed 30% value growth year on year to 15 August and the firm says its Choco Leibniz had driven 54% of value growth in the special treats sector.
In the Pick Up range Bahlsen has launched two new flavours, Dark Chocolate and Choco Caramel.
Both come individually wrapped and are available to buy in multi-packs of four biscuits.
“The huge success of Pick Up is attributed to a number of consumer and shopper activations since early 2015,” Duffin said.
“Additionally, Bahlsen has worked with retailers to increase its visibility in stores and implement effective point of sale displays to drive product trial and generate repeat sales.
“We’re very proud of Bahlsen’s performance in the biscuit category – with both Choco Leibniz and Pick Up driving growth in the special treats and chocolate biscuit bar categories respectively.
“Following on from this strong performance, we are delighted to be sponsoring comedy on Sky1.
“We are serious about our biscuits and believe this partnership demonstrates that.”