Bread and bakery goods provide some of the staple basics of the Scottish diet, they form one of the everyday essential categories that remain crucial to stores of all sizes, not least local convenience stores.
Economic conditions and demographic changes in recent years are said to have seen many more consumers choosing to shop little and often – all of which should be good for c-stores and their bread sales.
But the bread and bakery category has been heavily influenced by other factors too.

There’s been a fierce price war that has seen the price of some large big brand loaves in Scotland drop below 60p in supermarkets and discounters.
Bread has been affected as much as any other food category by moves towards supplying healthier products. And there have also been very many new products launched.
So what does it all add up to and how can local retailers make the most of a vital but increasingly diversified category?
Well there has been pressure on total sales value of mainstream bread but the major bread firms still stress positive developments.
Warburtons, quoting Nielsen figures to mid-July this year, said that with 26.3% share of unit sales in wrapped bakery, and with volume up 2.8% to 724m units a year, it had seen encouraging growth in wrapped bread sales.
Warburtons white bread, which makes up 74% of the brand’s total wrapped bread unit sales, had seen an increase in value of 6.7% year on year and of 12.4% in the most recent 12-week period compared to the equivalent period the previous year.
And that, the company said, had been driven by sales growth from Warburtons Toastie loaf, which Nielsen records as the best-selling wrapped bread product in the UK, which sold more than 100m units in the 12-month period.

Earlier this year the firm launched a major advertising campaign, featuring Hollywood star Sylvester Stallone, to support its core bread and bakery range.
Warburtons brand and portfolio director, Megan Harrison, said: “Our The Deliverers advert with Sylvester Stallone highlighted the extreme lengths that Warburtons goes to in order to deliver over 2m loaves of fresh bread to over 16,000 stores every day through our impressive delivery network, and this is only the beginning of what we can look to achieve as category leaders.”
The firm has been busy on new product development, launching several new ranges over the past 12 months, including Special Loaves, Thin Bagels and Shapes – with more new lines in the pipeline.
It says sandwich alternatives continues to be the wrapped bread sub-category showing the greatest growth with Nielsen figures to July this year showing unit sales up 8% (or 5.3m units) in a 12-week period compared to the year before, and 52-week volume sales up 29m units to 292m.
It introduced the first sandwich thins to the UK in 2011 and this year added to its sandwich alternatives range by adding Thin Bagels, and Shapes – pre-sliced Warburtons Cat Shapes and Warburtons Van Shapes designed to liven up kids’ lunchboxes.
Darren Littler, innovation director at Warburtons said: “Innovation is at the heart of everything we do at Warburtons and our Thins Bagels range is a great reflection of this. We’ve captured the great bagel taste and texture that consumers love and paired it with the trend for lighter sandwich alternatives to offer a delicious bagel range from 120kcal.”
Warburtons is also becoming more heavily involved in free-from bakery products.
It reckons the UK free-from market doubled in size between 2009 and 2014 to reach £365m. Recent figures from Nielsen showed it up 29% year on year. And, while growth is expected to slow, Warburtons says estimates suggest sector sales will nevertheless grow by over 50% between 2014 and 2019.
The growth coincides with free-from products becoming more widely available. They’re said now to appeal to consumers beyond those who eat them because of precise medical conditions. That’s down in part to ranges like Warburton’s own Newburn Bakehouse by Warburtons lines ‘normalising’ taste and texture, as well as to mainstream advertising to the mass market and the allocation of greater space to free-from products, it reckons.
It also expects free-from bread sales growth to result from increased use of FODMAP-friendly diets, which avoid a range of short-chain carbohydrates and are claimed by some to alleviate symptoms of gastrointestinal disorders such as irritable bowel syndrome (IBS).

• At Allied Bakeries, Jon Wilson, marketing director noted there has been a decline in overall sliced bread sales (down 2.9%) that had an impact on the overall growth of the bakery category sales. 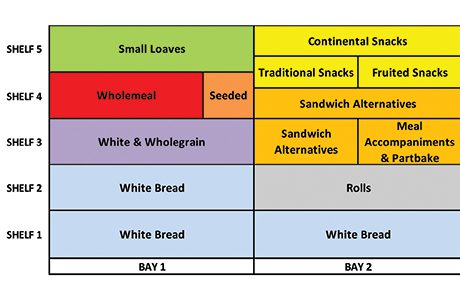 But last year, he said, Allied Bakeries launched Kingsmill Great White, a soft white loaf that contains as much fibre as wholemeal, which had quickly become very successful with the launch being seen as one of the most successful bakery campaigns in recent history.
Nielsen Scantrack figures had shown Kingsmill Great White to be the biggest food FMCG launch of 2014, achieving a total sales value of £23.4m and it had been named Product of the Year 2015 for the bakery category, Wilson said.
But innovation and new product development has been especially significant in convenient, and often calorie-counted, products offered as “sandwich alternatives”, he noted.
Nielsen research had shown the sub-category achieving growth of up to 10%. Allied launched Kingsmill Sandwich Thins, a soft, pre-sliced thin roll, originally available in white and 50/50 variants and now also in wholemeal, all with 99 calories per item.
Allied Bakeries says £8.4m worth of investment (including sustained marketing expenditure) has been committed to the development of the product.
The Kingsmill brand, the firm says, has one of the most diverse ranges on the market, including lines developed to meet increasing consumer demand for healthier products as well as a growing range of bakery favourites products.
Allied Bakeries says bakery favourites – products such as crumpets, pancakes, muffins and waffles – is a sub-category that remains hugely popular and is increasing value sales year on year. 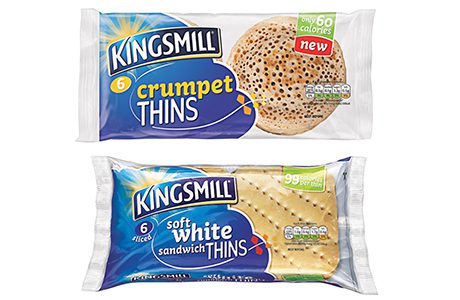 Kingsmill Pancakes and Muffins are the number one brands in their respective markets, it says, and the firm recently launched Kingsmill Crumpet Thins, thin crumpets of 54 calories each.
Allied Bakeries’ merchandising tips include:
• Serve those who are on a bakery-buying mission: The HIM Convenience Tracking Programme found that 60% of bakery shoppers in convenience stores are topping up. Retailers need to make sure they maintain good stock availability through the day – particularly in the afternoon and evening for after-school and after-work shoppers.
• Realise the bakery effect on basket spend: The average spend by bakery shoppers in convenience outlets is 25% more than the overall average. Retailers need to make sure they stock an optimum range of bakery goods with a good mix, so shoppers can find what they want.
• Realise the impulse effect: Compared to other shoppers in c-stores, the HIM CTP found bakery shoppers are more likely to buy on impulse. Retailers should capitalise on that by giving popular bakery lines prominent positions. Consider using off-fixture displays for goods like crumpets, muffins and pancakes?
• Realise healthy options are on the up: The healthier bakery sector has grown 10.6% in the last five years. Stock more sandwich alternatives (like Kingsmill Thins, Allied suggests), which have grown 10% year on year. Overall bread is in decline, particularly white bread. Keep white bread as a main feature of your fixture but offer a healthy alternative choice to white bread (from its own range the company suggests Kingsmill 50/50 or Kingsmill Great White).
• Use price-marked packs: 63% of consulted shoppers have said they’re more likely to buy a product that is price-marked. In response Allied Bakeries has introduced a variety of PMPs across its range of Kingsmill products over the past 18 months including Kingsmill Rolls, Crumpets, Muffins, Pancakes, Kingsmill 50/50 800g loaf and Kingsmill Great White.