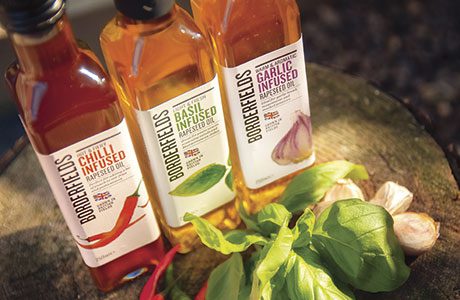 MARKET trends on culinary oils can be complicated. As the story in the panel on the right shows, recent changes in oil prices on international markets have varied hugely between different types of oil, usually because different types of oil-producing crops have fared differently in different climates across the globe.
But that seems to have created opportunities for some types of home-based culinary oils including rapeseed oil produced in Scotland and elsewhere in the UK, says one of the biggest rapeseed oil firms Borderfields.
Quoting Kantar Worldpanel figures produced in the spring of this year a Borderfields spokesperson said: “With the big four supermarkets increasingly cutting prices in order to compete with discounters such as Aldi and Lidl, the oil sector has seen a significant decline in value over the last year by 2.8%.
“However volumes have risen by 2.5%, as high street shoppers are putting more oil into their basket each trip. An increase in sales seen within the convenience store sector too shows the industry is still benefiting from a high demand for oil.
“Amid the struggles in the sector, particularly seen within the olive oil category, the demand for speciality oils such as nut and cold-pressed rapeseed oil is continuing to grow. These oils have seen an increase of sales by 27% to £28.3m.
“In particular cold-pressed rapeseed oil, which has half the saturated fat of olive oil, is continuing to see sales rise as consumers are becoming more health conscious and aware of its versatility in cooking.”
Borderfields, which has the largest dedicated cold-pressing plant in the UK, was launched in 2005 by a group of farmers.
The firm says Borderfields oil is now stocked in 2100 outlets nationwide. Store stockist numbers are up 15% on last year.
This year saw Borderfields introduce what it says is the UK’s first cold-pressed rapeseed stir-fry oil – to join its established range of Chilli, Garlic, Basil and Lemon infused oils.
The company argues the success of such new oils shows that there is considerable growth potential in the category.

The price of oil

If the price of the oil that fuels our cars and power stations can seem volatile so too can international trends on cooking oils.
Prices of many oils in stores fell earlier in the year.
Then the price of sunflower oil stabilised and the cost of seeds rose leading some analysts to expect higher prices.
But last month specialist online agribusiness sites said abundant soya bean production and economic turmoil in China meant prices of sunflower oil had actually crashed by 15%.
In direct contrast, specialist market news services covering olive oil business trends have recently suggested that olive oil prices are soaring, largely because there was a disastrous olive harvest in major producing countries like Spain and Italy last year. The oil shortfall hasn’t been made up by production in other countries like Greece and Tunisia even though olive crops there were much higher than the previous year.
But careful consumers, still guarding every penny, are thought unlikely to accept significant price increases.