AS a worldwide partner for the competition, Heineken plans to bring the Rugby World Cup closer to fans and is offering consumers the chance to get right to the centre of the action. 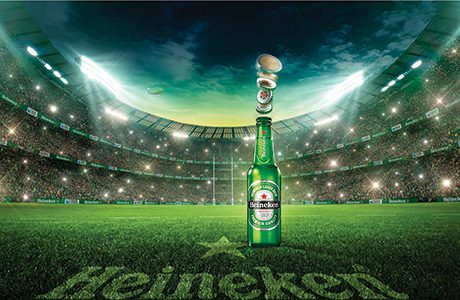 The beer brand has a long association with international rugby and was an official sponsor of the tournament in 1995, 2003, 2007 and 2011.
A spokesperson said: “In any sponsorship, we provide more than just branding or financial investment.
“Instead we aim to bring enjoyment and memorable experiences to the Rugby World Cup fan.”
The brand is behind a programme that will carry the competition’s glittering prize to the people on a special tour.
For the World Cup 2015 Trophy Tour, Heineken is taking the Webb Ellis Cup – named after William Webb Ellis who is credited with inventing the game at Rugby School by picking up the ball and running with it during a soccer match – to events across Great Britain and Ireland.
And 48 fans from across the world will be invited to play a part in the opening of matches at the official coin toss ahead of kick-offs.
Heneken brand director David Lette said: “With this coin toss opportunity before every match, we are proud to be rewarding passionate fans with a once-in-a-lifetime experience.”
Heineken will be creating digital preview and review shows of social media content throughout the competition.
The shows will be hosted by Jonah Lomu and Will Carling with contributions from fellow internationalists John Smit, Matt Dawson, Scott Quinnell, Rocky Elsom and Shane Horgan.
Lette said: “Through the Heineken Rugby Studio, we will create an engaging digital experience that gets fans closer to Rugby World Cup 2015 action.”
Heineken says that an estimated 92% of rugby fans will watch matches at home during the competition and 47% of those fans will be drinking beer, creating opportunities for retailers.
The brand team has developed special packs to tie in with the tournament.
Limited-edition designs will feature on 650ml bottles, 500ml cans, and 330ml cans and bottles.
And shoppers who purchase 12-packs of Heineken will be in with a chance of winning a pair of tickets or a Rugby World Cup coin toss-package by finding one of 50 hidden golden bottles.