MAIN trends in the confectionery market, according to Swizzels, include increasing interest in and purchase of large packs, and growing sales of gums and jellies.
The company behind Drumsticks and Refreshers says gums and jellies now account for 45% of sugar confectionery sales and are growing by £1.5m year on year.
And it says products in packs over 100g are worth £287m and growing at a rate of 5% a year.

Marketing manager Sarah-Louise Heslop said: “Variety packs are an important part of this trend.
“Swizzels holds a 90% share of sugar variety packs, and nine of the top 10 variety packs are Swizzels brands.”
Heslop said the Loadsa sharing bags £1 price-marked range has been redesigned. More than a million £1 Loadsa bags were sold in 2014, and brand sales are growing at 27% year on year.
She said increased sales of Squashies has made Swizzels the fastest growing manufacturer within gums and jellies.
“The bagged range sees Love Hearts, Drumstick Lollies, Double Lollies and New Refreshers transformed into a softer gum version.
“Sales have grown continually since launch and a bag of Squashies is sold on average every 2.6 seconds.”
The Squashies range has been extended with the addition of a Drumstick Squashies Sour Cherry and Apple variant in response, Heslop says, to consumer demand for sour flavours.
Among recent launches from Swizzles is a new Bon Bons range with Drumstick and Refresher branding.
“After gums, the second fastest growing category is bon bons with value sales up 34% year on year,” Heslop said.
The sweets firm has also introduced a range of pocket money sweets including a 10p Drumstick Bubblegum lolly and a mega Bubblegum Drumstick lolly at 30p.
And it has launched a 10p Refresher Rope in Original Lemon and Strawberry flavours. The firm says rope and lace sweets sales are now worth £27m. 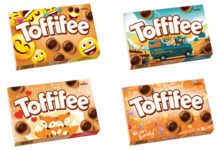