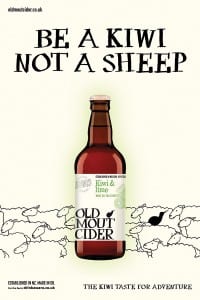 CIDER drinkers are being encouraged to embrace their inner kiwi in Heineken’s latest promotional campaign for its Old Mout cider.

Old Mout, which originates from New Zealand, was launched in the UK market last year to compete in the world cider market.

Heineken’s brand unit director Emma Sherwood-Smith said: “The campaign aims to associate the brand with an adventurous lifestyle and encourage people to try the unexpected fruit and cider combinations.”

All three will be promoted in the campaign.

Sherwood-Smith added: “Heineken has ambitious plans across the cider portfolio and we’re hopeful this campaign will build on a very successful launch in 2014 and encourage Old Mout consumers to embrace their inner kiwi.”