At launch there will be two variants – Galaxy Duet Cookies and Cream and Galaxy Duet Caramel and Shortcake. They will have an RRP of 60p. 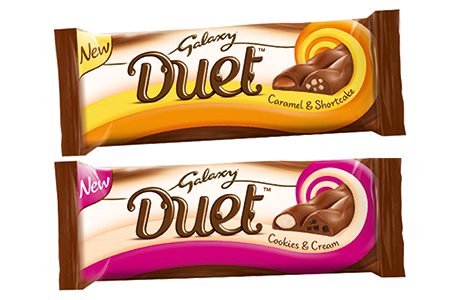 Revealing details of the new sub-brand to industry media, senior brand manager on the Galaxy brand Christophe Weber said the project had been running for almost two years and that the bars had, in independently-run market research groups, achieved the highest consumer satisfaction scores in the firm’s history.

The company had significantly increased product development, effectively doubling its “innovation pipeline”, he said. That had occurred as it became clear that block had moved to become the biggest sub-category of the chocolate market with innovation playing a major role in its growth.

The Galaxy brand was already having a good year with value sales up 10% in the year to date, with the launch of Galaxy Salted Caramel a highlight. And the market can expect much more innovation to come through in the next five years, he said.

Galaxy Duet will be supported by a dedicated TV ad in a launch campaign worth £1.5m. That will be part of a £12m overall Galaxy campaign where Galaxy will be on TV for 35 weeks of the year and will be the most heavily advertised chocolate brand in the UK.

Bep Dhaliwal, trade communications manager for Mars Chocolate UK, said: “New Galaxy Duet is one of the most exciting pieces of innovation we have ever launched.

“I’d encourage retailers to stock up early and ensure the Galaxy Duet displays are visible and eye-catching to ensure your customers know you stock this exciting new Galaxy sub-brand.”