Kilwinning’s KK Stores is a shop of two halves, run by two brothers who have invested in a massive refit to bring it up to date.

KK Stores in Kilwinning Main Street, Ayrshire is a business with a lot of history behind it. And for many years it certainly looked that way.
Previously a video shop which over time evolved to offer clothes, then memorabilia, then sweets and crisps, before morphing into a full convenience store and off-licence, it perhaps understandably developed quite a disorganised layout.
And at the start of 2015, the shop, which for the last nine years has been owned and managed by the Dhaliwal family, was really looking its age.
However, the store has since been brought bang up to date, with a comprehensive top-to-bottom transformation by refit and refrigeration specialist Vertex.
Out have gone the worn-out tobacco-coloured laminate flooring, replaced with top-of-the range grey tiles. Gone too is the old-fashioned strip lighting, replaced with energy-saving 36w LEDs. The shop’s fridges – a motley collection of different makes and models all rubbing shoulders in the corner – have been chucked to make way for top-of-the-line wall-to-wall fitted units. Shelving, fittings, doors, security, the list goes on. It is, effectively, a shop reborn.
This new era has been ushered in by brothers Sandeep and Mandeep, who recently took on the responsibility of running the business themselves after their father decided to take a step back.

“He’s still involved,” said Sandeep. “When you’ve been in charge for so many years you still delegate, but he is a lot more laid back now, just trying to enjoy his life and leaving most decisions to us.
“He’s quite old school and he was always quite happy to keep the shop the way it was. But we insisted we could make it a lot better and we decided we needed a refit to help build our customer base.
“We had ideas of what we wanted to do. It took about a year of planning, but we got it done and the rewards so far have been really good. We’ve picked up a lot more business.
“We didn’t expect it to improve as much as it has. It’s surprised us.”
Covering around 2,000 sq ft, KK Stores is split into two sections, connected by a short flight of stairs, which can effectively operate independently of each other.
The entrance on the town’s Main Street brings customers into the main shop, which includes soft drinks, confectionery, snacks, chilled food, groceries, and more.
Where before, customers would have faced two gondolas and one deals shelf, they’re now met by three gondolas and three end-bays, ensuring the shop’s mega deals are the first things people see when they enter.
That’s important. With plenty of competition in the form of Co-op, Tesco and RS McColl nearby KK Stores has looked to differentiate itself with its long-running megadeals, specialist products and services, all of which rely on effective display.
“We’ve got major competition, but we do all right by concentrating on our own things,” said Sandeep.
“The shelves are narrower, which we expected. We knew once we moved the counter and brought in a third gondola our shelves would be a bit smaller. But the range has improved. We run a lot of deals, we bulk buy whatever comes up on offer and we do shop around a lot at the cash & carries. We don’t stick to one. So we do a lot of deals but we always make margin and we use social media a lot to get the word out.”
Looking around the shop, it’s hard to think of a category that hasn’t been improved by the refit, according to Mandeep.

“We’ve brought in a lot of new sweets and boosted our confectionery section,” he said. “We really concentrate on multipacks because that’s what people want.
“Our freezer sales have gone through the roof. Originally we had the old-school chest freezers, but sales were next to nothing. Now we’ve made that section a lot bigger.
“Pet food we’ve doubled to two metres, soft drinks have doubled, chilled has doubled. The amount of stock we can put in the shop is small, but the range and display is really good.”
Despite good results, the current layout may not last for long. The brothers aim to make the most of their more user-friendly shop floor with a little chopping and changing.
“Since the refit we’re always trying to improve,” said Sandeep. “We noticed chilled sales weren’t the best, so we swapped the siting of chilled and soft drinks and now soft drinks have gone right up.
“We keep a close eye on our EPoS system and if something doesn’t sell we take it out and replace it with something that will. That’s what we do across every category – crisps, sweets, juice – we just look at what sells. And we believe in moving things around because it gets customers moving around the shop.”
And again, KK Stores benefits from effectively being two businesses in one.

Entering from the car park at the rear of Main Street customers arrive in the off-licence area, which features an extensive range of spirits, wines, beer and cider as well as a secondary soft drinks fridge.
Previously, all the wines, spirits and ciders were behind the counter. During the refit, fridges were introduced for wine and the counter was shortened, allowing access to cider, while a second till point was opened up.
“It used to be that we only had one till point and at weekends we had queues out through the door,” said Sandeep. “It just wasn’t sustainable. The last thing you want is to be keeping customers waiting.
“Now, at the weekends, we put both tills on and sales have been tremendous. Better than I expected. We’re getting 15-20% sales increases every week. That’s nothing to grumble about.”
During the refit, the shop was closed for three days, but business never quite ground to a complete halt, with trading switching between counters.
The family, their staff members and customers have all been very pleased with the results. But there’s a feeling that for Sandeep and Mandeep things are just getting warmed up.
Neither brother could be accused of being short of ideas. Even in the short term there are new products and services they want to introduce to the new-look store.
DPD parcel collection is new to the shop this month, as is a slush machine, while chilled food and food to go are both continuing works in progress. The brothers also have hopes of bringing in the lottery and are even thinking about replacing one of the tills with an ice cream counter.
“People used to wonder what we were doing with our lives spending all of our time working in the shop,” said Sandeep. “They would ask us what we thought we were going to achieve staying here. But now I look at it and I just think – look what we’ve done!”
Mandeep added: “We’ve got a lot from working in here and we’ve got a lot planned for the future. I actually love coming into the shop ever day. People might not believe it but I do. I think it’s the best thing. It really is.”

Photographs from before and after show the remarkable difference that has been made through the refit, undertaken by Vertex: 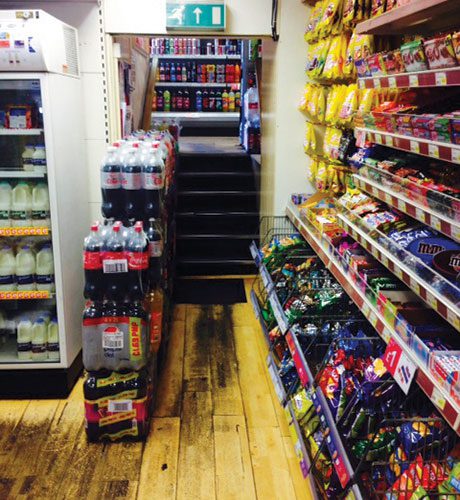