Carronvale Service Station in Larbert is the flagship and test bed forecourt of Certas Energy. Scottish Grocer’s John McNee visited the site and spoke to members of the management team.

ON top of being one of the largest fuel and lubricant distributors in the UK, supplying many independent dealers, Certas Energy has for the past two years run a network of owned and operated forecourts in Scotland, through its Gulf brand.
Though the company’s overall expansion has been rapid, there are still plenty of Scottish retailers who do not know what they could expect from a partnership with Certas. If they want to find out, they could take a trip to Carronvale Service Station, the firm’s flagship company-owned site, just a few minutes’ drive from its Scottish head office in Larbert, Falkirk.
Three years ago, when Esso began to pull out of owning sites in Scotland, it looked like Carronvale Service Station would close. That changed when one of the directors of Certas Energy, driving past on his way to work, stopped in and asked what was happening to the station.
It was subsequently leased to Certas Energy and brought under the Gulf brand, with investment in new equipment and in the shop, which was refitted and reopened as a Londis.
Over time, Carronvale has evolved into a one-stop-shop for fuel and grocery shopping, serving locals and passing motorists. The aim is to compete with supermarkets in terms of price but beat them hands down for convenience and customer service.
“We’re here for the long term,” said the company’s retail director Ramsay MacDonald.
“We’ve come into this from the fuel distributor background. Obviously, we’ve got the dealer side that we supply, but that’s almost an extension of commercial sales. For us to actually get into the meat and drink of retail is a step change for the company, but it’s an area we want to grow and develop.

“You may ask where the commercial imperative is for us in taking on this business, but we think we can make money out of it and we also think we can help heighten retail standards across the piece. The other thing is we supply 1,000 dealer sites across the UK and this is a great way of helping them to see what we’re doing.
“As an example, we think we know the formula you need to go through get an alcohol licence. You’ve just got to apply that formula. It costs you cash, you’ve got to do market research, ask the right questions. It’s not enough just to get a petition with the names of a few customers. You’ve got to face the legal tests. That’s the stuff we’ll share with guys.
“We’ve had about four or five customers that we’ve taken around the sites and they absolutely love spending time at them, asking about details and getting honest answers. I don’t think other, more traditional oil companies will do that; they don’t like to be criticised, whereas we’re quite humble about that sort of thing.
“The dealers will share their ideas and we’ll pinch ideas from them, while they love having the ability to have a say in our business.”
It helps that the company has been able to show figures that support its approach, with Carronvale’s shop sales and average weekly fuel volume increasing by upwards of 20% in the past year. 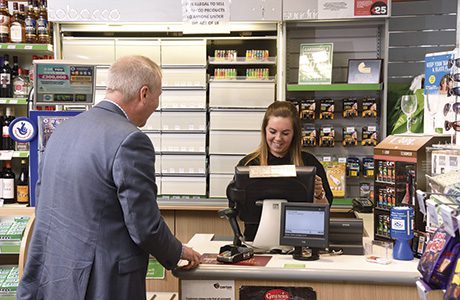 Growth isn’t limited to Larbert, the firm says. On the eight Gulf sites run by Certas Energy, fuel volume is said to be up 25% year on year across the board.
The company has in the past year brought in some new faces, including Colin Levy, company-owned operations manager and Donald MacGregor, company-owned company-operated (Coco) area manager. With broad experience in retail, Donald is constantly striving to improve the customer experience, using Carronvale as a test bed for new ideas.
“The world is moving away from that standard forecourt experience of the past when someone came in to purchase some fuel and maybe one item if it was sitting at the cash desk,” he said. “Now we’re using the theatre of retailing, creating positive messages encouraging people to purchase not just impulse goods but grocery goods they need.
“We do test out a number of things here before we roll them out across the estate.”
For the past 18 months the site has been managed day-to-day by Derek Paton, who has noticed a marked change in the behaviour of customers in that time.
“Customers are now calling all the staff by our first names,” he said. “That’s big. It means they’re regular, they’re comfortable, they’re happy. There are a lot of regulars now. The c-store’s always up to a good standard. It has to be, with head office just along the road. Yes, there are some areas where we’re still falling short, but we’re going in the right direction.”
All of the team’s efforts were rewarded earlier this year when Londis held its annual Store of the Year awards. Carronvale won Multiple Account of the Year for its dedication and achievements in areas including customer service, product range, store standards and compliance.
The store was particularly credited for its tight controls, reporting and willingness to learn and grow.

“That gave us all a real boost,” said Ramsay. “It gave us the confidence to say we may be new at this but we’re not bad.”
Donald added: “We feel we’ve made great strides, but we recognise the potential for us to grow in many ways.
“We know we can take it forward and we’re willing to listen to people, canvass opinion within our business, where we can find expertise on every aspect.
“That’s the great thing about Certas, there’s so many different aspects to the business. We’re collecting fuel, delivering fuel and selling fuel. The different facets of the business support each other and for us, being one sector within a larger organisation is really paying off.”