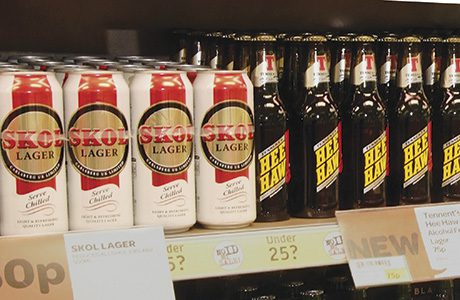 SCOTS shoppers appear to be buying considerably less alcohol through the off-trade since the reduction in levels of permitted alcohol for drivers.
But it looks as if the giant supermarkets are taking most of the hit. Beer, wines and spirits sales in impulse outlets such as convenience stores have held up well.
In-depth analysis, by market research firm Nielsen, of alcohol sales north and south of the border, in the 16 weeks immediately after the 5 December introduction of the reduced blood alcohol limits, showed sales trends in Scotland were well behind England and Wales.
Overall beer, wine and spirits sales in the 16-week period, compared to the same period the year before, were up 2.4% in England and Wales (with E&W supermarkets up 3% and E&W impulse stores up 0.2%).
In stark contrast, in Scotland overall off-trade alcohol sales – in a period that included Christmas and New Year – were actually down by 0.4%. But, while Nielsen measured Scottish supermarket drinks sales as decreasing by 1.6%, drink sales in Scottish impulse outlets were up by a very considerable 5%.
Wine in Scotland dropped by 4% and cider was down by 3.8%. Beer showed a slight decline of 0.6% against 0.4% growth in the rest of the country. But growth in sales of no and low-alcohol beers and of lighter lager (typically 2.8% ABV) was substantially higher in Scotland.
But it is in spirits sales that Nielsen saw the biggest variation. While spirits sales in England and Wales were up by 6.1%, they only managed a 0.8% increase in Scotland. Nielsen calls the difference, in value terms, a £3.2m missed opportunity in the Scottish off-trade.
And the spirits growth north of the border was largely recorded in the last four weeks of the 16. In the Christmas period Scotland was very considerably behind English & Welsh spirits growth.

• What’s your experience? Have your sales grown? Are you selling more low alcohol lines? Contact patrick.duffy@peeblesmedia.com or 0141 567 6074.