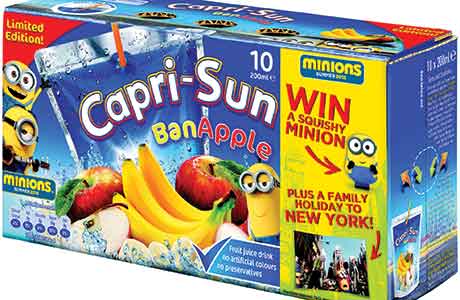 ONE of the big family film releases of the summer will be Minions. And soft drinks firm Coca-Cola Enterprises will team up with the movie by launching a new Capri-Sun on-pack promotion as well as a limited-edition flavour.
The Minions on-pack promotion will feature on all 10-pack Capri-Sun variants, including the new No Added Sugar range and will offer consumers the chance to win one of 2,000 squishy Minions and a family trip to New York.
The new BanApple flavour Capri-Sun – made from banana and apple juice – is being rolled out by the company this month.
This year’s activity follows the partnership between Capri-Sun and 2013’s Despicable Me 2 film.
The promotion will be supported by in-store displays and a £200,000 advertising press campaign targeting mums.
CCE has also launched Capri-Sun No Added Sugar lines, including Orange, Blackcurrant, and Tropical flavours.