DRINKS giant Diageo is adding to its range of price-marked-pack spirits with the launch of Johnnie Walker Red Label PMP in 70cl and 35cl.

Patricia Mota, category development manager for RTM/convenience at Diageo GB, said: “We know that PMPs are a proven driver for consumers.They inspire trust and improve perception, resulting in more sales for your store.

“All convenience stores deal with the barrier that is consumer confidence, and retailers can combat this by stocking a range of PMPs, assuring shoppers that they are not being overcharged, and improving the price image of your whole store.”

• PMPs have become common in many product categories, especially in convenience stores but some in the drinks industry think they have still to be used extensively on wine.

However, last year Treasury Wine Estates launched a range of PMPs on some of its biggest brands, including Wolf Blass and Lindeman.

“We’re already seeing an increased rate of sale and frequency of purchase on the PMPs in comparison to standard packs,” said Shaun Heyes, business sector controller – impulse at TWE.

“This demonstrates the important role PMPs play for any retailers looking to offer customers value-for-money products, while driving sales.”

He said it remained to be seen if PMPs would go on to play an important role in the wine market, but the early signs are that it will.

“The positive feedback we’ve had from both retailers and shoppers on our range of PMPs suggests that this is an area we can expect to grow as the wine category catches up with the other FMCG categories,” he said.

• SHS Drinks says high levels of consumer demand for PMPs led to the decision to launch WKD Red 700ml £2.99 PMPs in the convenience channel this spring.  The product was made available in March in specially flashed cases (6 x 700 ml bottles). 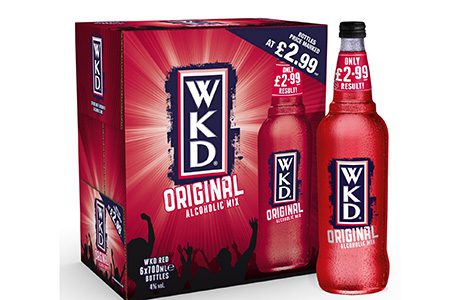 • Over the past year, C&C Group has introduced a number of new PMPs to the UK off-trade including Blackthorn Black ‘n’ Black 4x500ml and Magners Orchard Berries 4x500ml.

He said: “While the economy is improving, customers are still focused on getting the best value for money and actively seek out promotions, PMPs and price reductions in the off-trade. Over the next few months we will be announcing a number of new and exciting promotions and offers.”