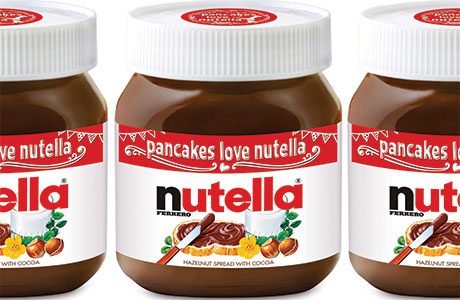 NUTELLA from Ferrero, the clear market leader in chocolate spreads and the number one spread in Britain according to last autumn’s Key Note market report, has been busy pushing to achieve a still greater share of the market.
The brand team reported a 33% rise in sales in 2014 saying Nutella had attracted 343,000 new shoppers and had made it on to the shopping lists of one in five UK households.
Ferrero said recently that Nutella sales had been growing at 18.6% a year and that three of its products feature in the top six spreads SKUs.
New products introduced to the range last year included Nutella and Go, which packages Nutella with breadsticks.
Towards the end of 2014 the firm spent £1.8m on a campaign to promote Nutella as a breakfast product. Running across TV, radio and video on demand, the campaign also included in-store activity and sampling to reach 95% of the country’s mums.
For this year’s Pancake Day it ran a £1.4m campaign with the slogan Pancakes love Nutella.