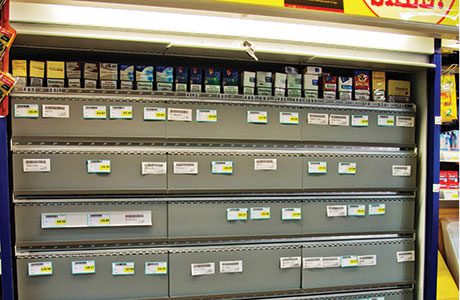 SCOTLAND’S small stores will have to follow the country’s supermarkets and cover up tobacco and related products from 6 April.
But many of the country’s community retailers now have their gantry-covering flaps or other systems in place and are deciding to go dark ahead of the deadline day at a time of their own choosing.
Tobacco giants Imperial Tobacco and JTI, who between them have many thousands of installed gantries in small shops across the UK, have been fitting equipment with new compliant covers. JTI started its programme last year and began in Scotland because it viewed the stricter rules north of the border on the space that will be allowed to be revealed would mean installation and staff training would take longer than in England.
At Spar Logans Road, Motherwell, owner Asif Sardar told Scottish Grocer he had decided to close most of the flaps on the store’s gantry well ahead of the deadline and label the flaps with the brands and sizes of the items behind the screen – in a bid both to get customers used to the new regime and to help staff learn the brands layout.
The eight stores in the Scotfresh chain of convenience stores in Glasgow, Ayrshire and Stirlingshire have gone dark and retail operations manager Chris Gallacher told Scottish Grocer it was too early to draw any conclusions but that any changes in the first days had been marginal.
Iain Wilson, whose Nisa Extra store in Dundee is considered a large outlet and has been dark for almost two years, said his experience was that customers often default to major brands rather than ask what is available.
One retailer told Scottish Grocer that since going dark he has been able to stock non-PMP 10s and make more margin.