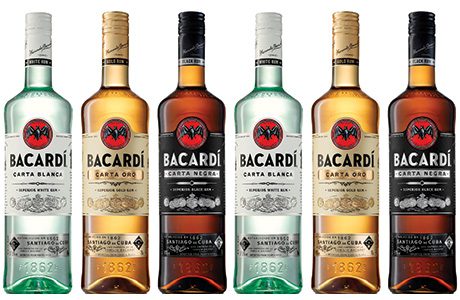 BACARDI has updated its packaging for the first time in over a decade.
The makeover includes the introduction of a new bottle and a return to the original Spanish names for its rums.
The new bottle is slimmer and taller, designed to be easier to handle.
In the renaming of the portfolio Superior, Gold, and Black have become Carta Blanca, Carta Oro and Carta Negra.
Each new bottle features a label telling a brief history of the Bacardi family, the brand and the rum.
The labels are made with recycled cane fibre, a by-product of rum making.
Bacardi global brand director Caroline Hipperson said: “Our vision was to create a bottle that told the story of Bacardi, its heritage and the masterful crafting that goes into the creation of each of our premium rums.”
A film developed to support the launch of the new packaging features Bacardi master blender Juan Piñera and New York bartender Steve Schneider and a soundtrack by DJ Hudson Mohawke.
The Bacardi Untameable Since 1862 TV ad, which first aired in the UK in spring 2014, will be back on air and from mid-April.
Caroline Hipperson said: “Support for Bacardi rum in the UK this year includes digital content, digital display and out-of-home print advertising.