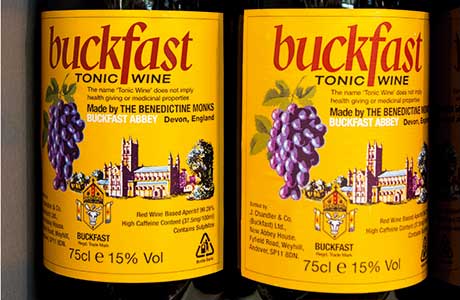 WHILE virtually all of the other top-selling alcohol brands in the Scottish off-trade can be slotted into one category or another, Buckfast is different.
It’s a tonic wine. It includes caffeine – a matter of controversy for some, including some politicians. There are other tonic wines, and in days gone by there were fortified wines that were popular in particular parts of Scotland.
But Buckfast, produced by the monks of Buckfast Abbey in Devon, is very different because it built very great success in its heartland market of Lanarkshire and has since expanded into many other areas of Scotland.
Last year at this time Nielsen placed it at number 16 in the Scottish off-trade top 50 alcohol brands.
This year it’s at number 14. It isn’t included in Nielsen’s light wine category but its top 50 position makes Buckfast the third-biggest selling wine brand, of any sort, in Scotland – behind only Hardys and Blossom Hill and ahead of Echo Falls, Gallo and others.
Both Hardys and Echo Falls are umbrella brands which cover several different types of wine. Buckfast is one wine only, so there’s a very good chance that the product is the biggest-selling off-trade wine, of any sort, in the country.
And a huge proportion of the £16.4m Buckfast sales value recorded by Nielsen goes through Scotland’s convenience stores.
In 2014 the brand trialled Buckfast in cans and it has also been working with top chef Martin Blunos on Buckfast cuisine.