SHOPPERS are making more visits to c-stores than ever before, but retailers need to work hard to keep them out of the hands of competitors.
That was the message from Katie Hemmings, commercial director of specialist analyst HIM Research & Consulting, to the recent SGF Conference.
“Shoppers are on autopilot more than ever,” she said. “We do research every single year in stores, we observe them, take a look at the routes they take. This year, more than ever, they are in a routine. So it is absolutely vital that suppliers and retailers disrupt that routine and encourage them to purchase.”
She said HIM’s work had revealed a “new breed of shopper”, shaped by social and demographic changes over the last decade, who were now more demanding and much less forgiving.
“They’ve got a lot on their doorstep now, different retailers to go to, really they have been spoiled and their standards are very high,” she said.
“They also want to be spoon-fed everything. They are expecting you to inspire them, to provide them with easy meal solutions.”
HIM also learned that people in different regions want different things from their local retailers.
“In London, good customer service is just smiling at them and letting them get on their way,” she said. “But in Scotland customer service means something different. It’s more of an emotional service, rather than just functional.
“They do want a bit of a relationship with you as a retailer, where you know their name.
“Higher than the rest of the UK, they put real importance on community retailing and this is an area where you can differentiate against the multiples.” 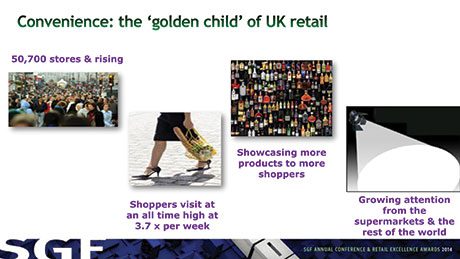