AN 18-year-old retailer from Fife, widely reported to have set his sights on becoming Nisa Retail’s next chief executive, has told Scottish Grocer he won’t be a candidate for the post.
Harris Aslam, of Kirkcaldy, made national headlines in September when it was reported that he was preparing an audacious bid to fill the shoes of departing Nisa chief Neil Turton.
However, Aslam, who is already on the board of the mutual wholesaler and retailer, reckons the story was blown out of proportion.
“I did tell the Sunday Times that I was considering it, but I don’t know where they originally got the story from,” he said.
“It was never more than an interest. I didn’t apply for the role and never said I was going to apply either.
“I am all for the younger generation stepping up and I want to do more to get youth involved in our industry, and I did think being CEO could certainly help do that, but after giving it some consideration I decided it wasn’t for me.
“On a personal level, would I have even stood a chance? I don’t know.”
Born into a retailing family, Aslam started taking on managerial responsibilities when he was just 13. The same year, he left school to pursue an HNC in legal services at Adam Smith College, before going on to university at 15. He now runs three Nisa stores in Fife with his cousin Raza Rehman. Their company, Eros Retail, recently reported annual turnover in excess of £3m.
He spoke to Scottish Grocer days before the launch of Fresh Kitchen, a new food-to-go service with Stephens Bakery, based at his flagship store in Leven.
“The concept is to offer the ultimate food-to-go solution,” said Aslam. “Our offering before has just been packaged sandwiches.
“Fresh Kitchen is our solution that we should probably have been doing two years ago, because the whole industry is moving towards food to go.”
A plan has been put in place to provide a broad variety of fresh food including breakfast rolls, sandwiches made to order, pastries, baked potatoes and hot coffee. Noodles and choose-your-own pizzas will be added to the menu at a later date.
Aslam said: “Fresh Kitchen’s a big part of our retail strategy. The branding is fantastic and the quality will be very good, but we’re keeping it affordable.
“Leven is our test bed, so we’ll see what works and what doesn’t, before taking it out to our other stores.” 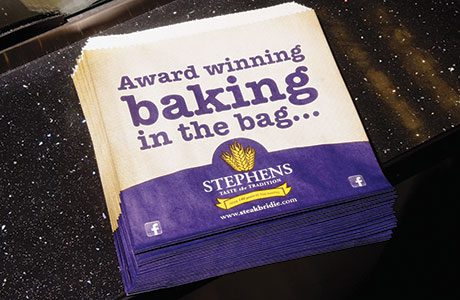