The affluent Aberdeenshire community has a thriving town centre blessed with a remarkable number of independent retailers, restaurants, bakeries, butchers and cafés. You might think a convenience store would find it difficult to compete.
However, by providing a remarkable range of goods – in chilled food and drinks, beers wines and spirits, specialist confectionery and, especially, fresh food made on the premises – McLeish in Market Place has impressed customers and grown its business. All of that helped McLeish take Scottish Grocer’s Chilled Store of the Year Award 2014, run in association with Müller Wiseman Diaries.
Formerly part of a high-end deli chain – which went into administration in 2009, the reborn McLeish now stocks all the usual convenience lines but most of its recent growth has been in its chilled ranges.
Dairy goods are important to the store. Owner Scott Graham collaborated with Müller Wiseman Dairies in the careful merchandising of the milk chiller to ensure it serves the shop’s wide variety of customers – from schoolkids on their lunch break to fans of organic products. Scott reckons his is the only store in the area in which all beer and white wine is chilled, ready for immediate consumption. And fresh produce is showing good sales growth.
But if there’s one thing that distinguishes McLeish from other shops in the area it’s probably its freshly prepared food to go. 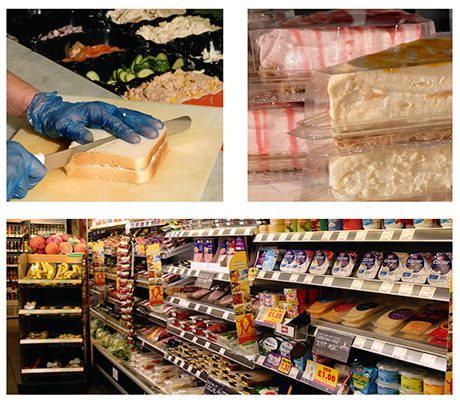 “There’s a lot of competition,” said Scott. “There are something like 38 places to get coffee in Inverurie. It’s ridiculous. There are about eight or 10 tearooms within a mile. What we do have, as our point of difference, is the food-to-go chiller at the front of the store, with all sandwiches made on site.”
McLeish’s kitchen and deli staff prepare and sell a tremendous number of products every day. It’s a lot of work, according to Graham, but worth it.
“A sandwich would cost about 80 or 90 pence to make, but the retail price is more than double that,” he said. “It’s very labour intensive, there’s a lot of legislation attached to it and we obviously get a lot of visits from environmental health, but it delivers a huge margin, so that makes it worth it.”
The McLeish food-to-go day begins with breakfast rolls at the start of the commuter rush at 6am. Then staff prepare cold filled rolls, sandwiches and salad boxes. Demand is high through to the end of lunch-time, and there are visits throughout the afternoon and into the evening from commuters, shoppers, local workers and around 300 schoolchildren.
Each day they can expect to make and sell between 150 and 200 sandwiches, 40 to 60 rolls, 40 wraps and around 50 salad boxes.
Complementing McLeish’s own range in the food-to-go chiller are a number of big brands and a good variety of products from local sources, clearly highlighted.
Pies and pasties are from Inverurie butcher John Davidsons, Bruce of the Broch provides tubs of soup, cheesecakes come from Bert Fowley of Fraserburgh.
The same approach extends across to a second chilled food section at the back of the store, where customers can find fruit and veg from Turriffs of Montrose and items from chilled food specialist distributor Fife Creamery, as well as butcher meats and ready meals, all locally sourced.
“One of the big things we do is we keep it local. That’s one of our tag-lines,” said Graham. “We’re all about using local suppliers and no matter where you go around the store there’s a local emphasis.
“It helps when you’re trying to build up relationships with people if you can just go see them. In the case of Bert Fowley I just popped into his shop and asked if we could try a range. We started with five of his ready meals and now we do 17.

“We used to do £200 to £300 a week on fruit and veg, and now we’re doing £800 a week. That’s just come from working closely with the guys from Turriffs to get the right range and presentation.”
Looking to the future, Graham’s already planning another chiller.
“News and mags are on a downward spiral,” he said. “So I’m thinking of repositioning it away from the front of the store and putting a two-metre chiller in there with fruit and veg, considering the growth it’s shown.” That would make five chilled sections across the store – Graham is keen to build on what works well for him.
He said: “Last year we did a lot of work on cost controls. We really tightened things up and it’s worked great. It’s one of the best things we’ve done.
“Last year was our fifth year in business and it was our
best by a country mile. The last few years have been tough, so to be doing well now is fantastic.” 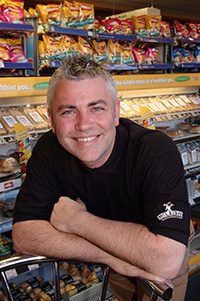 Chilled Store of the Year
– Sponsored by Müller Wiseman Dairies

• McLeish of Inverurie was originally part of the McLeish chain of delis, which went into administration in 2009.

• Scott Graham, owner and director of Graham’s Retail Ltd, purchased the store and reopened it with more focus on convenience.

• The store has two full-time members of staff and 18 part-timers, most of whom work on food to go.

• As well as keeping the chillers stocked, McLeish’s kitchen provides catering for local business and supplies all the sandwiches to the Inverurie Locos football team.