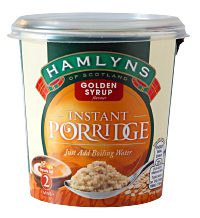 HAMLYNS of Scotland is ramping up marketing and promotional activity in support of its new Scottish Porridge Sachets and Porridge Pots in a bid to ensure maximum sales and distribution over the winter.

Both ranges are available in three varieties: Original, Golden Syrup, and Mixed Berry.
The brand’s owner and its sales agency the JFK Partnership say sales since the launch this spring have been “very encouraging”, and they expect them to soar over the winter months – as a result of normal increased demand in colder weather and a series of trade and consumer promotions.
Consumer advertising, including money-off coupons, will appear in Scottish local newspapers this month. And there will also be consumer competitions and advertising in special interest magazines,including one-off publications such as the Ryder Cup Concert programme. Hamlyns is continuing as main sponsor of the World Porridge Making Championships, which celebrates its 21st birthday on Saturday 4 October in Carrbridge. The competition attracts porridge makers from across the globe, and the 2014 competition includes contestants from Hong Kong, USA, Germany and from throughout the UK.
The Hamlyns sampling team will be at the event and at two of Scotland’s leading consumer shows – the BBC Good Food Show in October and the Country Living Fair in November, which are said to attract almost 40,000 visitors.
Scottish chef, Nick Nairn, is currently working on four new recipes that will feature in a new leaflet, which will be available for the first time at the BBC Good Food Show.
The company will be introducing new style packaging for the traditional Hamlyns of Scotland ranges of Scottish Oatmeal and Scottish Porridge Oats, to match the style the new products, early in 2015.
John Kerr of The JFK Partnership, which handles Hamlyns, said: “We have been allocated a significant budget to create a strong range of tailor-made promotions, and are working with all of our customers to maximize this investment in the hot cereals months ahead.”