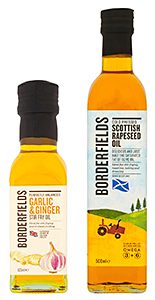 ONCE it was a specialist product, known and used by foodies and endorsed by celebrity chefs but now cold-pressed rapeseed oil is increasingly seen by consumers and the trade as part of the mainstream, according to producer Borderfields.

“That’s reflected in two ways,” said the company’s managing director Ben Guy.
“Our sales are soaring – up 109% in Scotland in the last year – and shoppers increasingly see cold-pressed rapeseed as a store cupboard staple.”
The firm says that according to market research carried out for it earlier this year for Borderfields, almost 20% of shoppers now describe rapeseed oil as a kitchen essential.
“This is great news for the category, though of course, it means that there are still many more consumers to attract,” said Guy.
Borderfields argues that it’s doing its bit to make cold-pressed rapeseed oil as appealing as possible. The brand offers a Scottish variant of its standard 500ml bottle, badged with the saltire and made exclusively with oil seeds sourced from the Borders area.
And it says it has also achieved strong national listings for its infusions range, now available in four varieties – lemon, garlic, chilli, and basil – all in 250ml bottles. Borderfields has also just launched the category’s first Stir Fry Oil, infused with garlic and ginger and available in 125ml bottles.
In another first, the brand is offering gift packs of 3 x 125ml bottles of its infusions for the Christmas period. “It makes an ideal gift for anyone who cooks,” said Guy.
“And again, it will help to introduce people to just how versatile cold-pressed rapeseed can be.
“We are still tiny compared with the leading olive oil brands but shoppers now understand that Borderfields is at least as good as extra virgin olive oil for many culinary purposes and much better for some, like frying and roasting.
“We’re seeing increasing consumer awareness of the health benefits of cold-pressed rapeseed oil too, with half the saturated fat of olive oil. It is increasingly mainstream and a serious competitor for olive oil space in the oils fixture.”