SCOTLAND has lost its claim to having more convenience stores per head of population than any other part of the UK, according to new research. 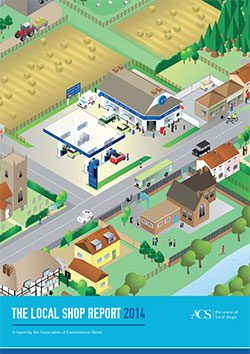 Last year, Scotland’s 5,536 c-stores put it at the top of the table, with one store for every 949 people. However, the Association of Convenience Stores’ Local Shop Report for 2014 shows one store per 958 people while Wales has moved marginally ahead with one c-store per 955 people.
In total, there are 50,747 convenience stores in Scotland, England, Wales. The region with the lowest density is south east England with one shop per 1,418 people.
Employment in Scotland’s local retail sector is up, providing jobs to an extra 649 people and bringing the total number of local retail employees to 42,255.
Independent retailers (non-affiliated and symbol) account for the largest share of sales in the sector and have by far the highest number of stores. But local stores from multiple retailers are growing fast.
Visit frequency, average spend and the number of first time investors were all up. Fastest growing category was fruit and veg, up 8.4%, news and magazines was down 4.5%.
The Local Shop Report 2014 is the third edition produced by ACS. It brings together statistics from several sources including HIM Research, Nielsen and IGD.
The report can be downloaded from www.acs.org.uk
Scottish Grocer will feature more detailed analysis of the ACS Local Shop Report in November’s edition.