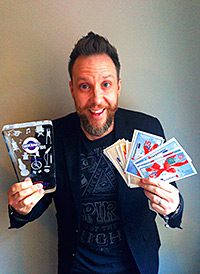 THERE’S the Edinburgh Festival, which is one of the most highly regarded arts festivals in the world.

There’s the Edinburgh Festival Fringe, which is the largest arts festival the world.
And there’s the Deuchars Beermat Fringe, a national competition sponsored by Deuchars IPA to find fresh new talent for the Edinburgh Festival Fringe.
The 2014 competition was won by Newcastle singer songwriter Jonny Boyle who fended off competition from all over the UK to walk away with the Deuchar trophy and a £1000 voucher prize.
His very special rendition of Stevie Wonder’s “Superstition” won him a place in the top three through the audience vote. And judges from the entertainment industry then selected him as the overall winner.
Andy Maddock, managing mirector at Caledonian Brewery, where Deuchars IPA is brewed and the showcase final was held, said: “Jonny was a worthy winner and we’re sure he’ll go on to greater things.”