BRITS spent £1.3bn on sweet treats to slip into a lunchbox last year. According to Premier Foods, which has the Mr Kipling brand among others, cake features in 7% of all packed lunches.

That, the company said, “highlights the importance of a light, sweet finish to a lunchbox meal”.
To meet the demand, Mr Kipling launched handy snack packs – individually packaged slices of its most popular cakes – in September 2011.
“Mr Kipling Snack Packs are a great example of how repackaging an existing product in a new single-portion format, suitable for lunchboxes and out-of-home snacking occasions, can be hugely successful,” a company spokesperson said.
The company says snack packs have generated £31.5m sales (according to IRI) by responding to consumer demand for convenience, especially for products that allow easy, on-the-go consumption.
“The format encourages shoppers to think of cake outside of the traditional teatime occasion, creating a significant growth opportunity for the category as cake becomes a viable option for snacks, lunchboxes and sharing,” the spokesperson added. 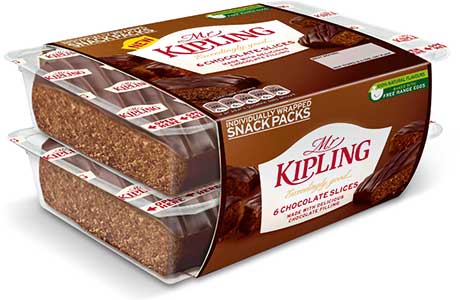 [hr]
• Premier Foods has repacked and reformulated its Ambrosia ambient desserts, launching mini pots that it says are ideal for children’s lunches.
Ambrosia Minis, which launched in March, have added calcium and vitamin D. They contain no preservatives or artificial colours, flavours or sweeteners. They come in six-packs of 55g pots.
Premier Foods says that its pre-launch research showed a high level of purchase intent for Ambrosia Mini Pots, with 79% of households with children aged between one and seven saying they would definitely or probably buy them.
The format has proven to resonate with the target consumer with Kantar research showing that 55g pots are perceived as a good size for younger children.
Nielsen figures show that 3.5m households already buying mini pots of some variety.