But the Glasgow-brewed brand couldn’t resist giving visitors a special welcome to its home city as the giant sports fest was set to kick off.
A mysterious T- branded water tower appeared in Glasgow Airport. And, in typical Glasgow fashion, it wanted a chat. The tower had its own line in Glasgow banter and it demanded a high standard of wit and wisdom in return.
If it decided any of its new mates’ conversation was lacking in street cred they were told: “Yer patter’s like watter!” and they were given exactly that, some nice Glasgow water.
But if they were grown-ups and they could verbally josh with the machine at an acceptable Glasgow level, they were rewarded with a nice cool Tennent’s.
So, if you found some visitors winding up a four-pack in your beer aisle, now you know why. 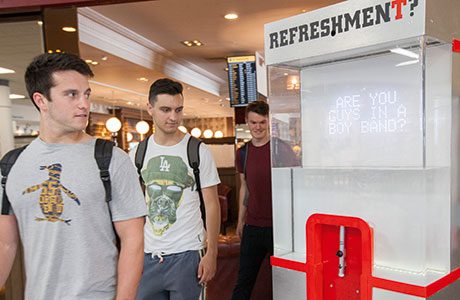