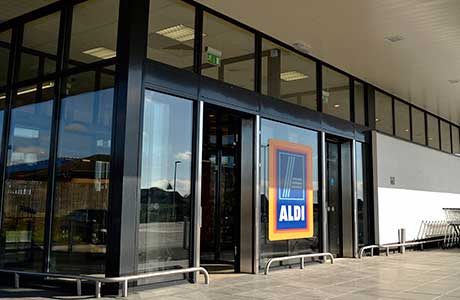 Poll company YouGov’s mid-year list of the top 10 brands in terms of consumer perception puts Aldi in pole position with Lidl also entering the chart – at number four – for the first time.
The German company’s score, based on YouGov BrandIndex Buzz criteria measuring positive and negative things said about a brand, was 25.9. Aldi also experienced the second fastest growth so far this year, with its Buzz score up 15.6.
Rival discounter, Lidl, scored 18.2. Waitrose moved up from ninth position to fifth while Sainsbury’s held on to tenth spot.
Sarah Murphy, BrandIndex director at YouGov, said: “The budget grocery stores are making deep inroads into the supermarket sector and are also shaking up the retail landscape, with Aldi coming in ahead of established brands such as John Lewis.
“The others in the top 10 may need to react and adapt in order to maintain their place in the hearts and minds of consumers.”
The discounters’ ongoing success is underlined by Kantar Worldpanel’s figures for the 12 weeks to 22 June, which show them holding their record market shares of 4.7% (Aldi) and 3.6% (Lidl).
Fraser McKevitt of Kantar commented: “Both retailers have recently announced impressive expansion plans. Aldi will aim to double its store numbers to 1,000 by 2021 while Lidl is seeking to boost its present to an eventual total of 1,500.”
Waitrose is also performing strongly, up slightly on the last quarter’s figures with 5% of the market. Of the big four, Tesco and Morrisons are toiling, down 1.9% and 3.8% respectively.
• Lidl has published its tax bill, showing that it paid more than £25m in corporation tax in 2013.