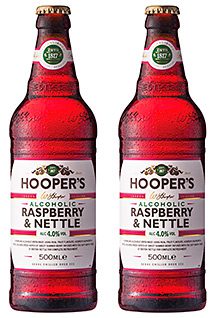 Made using natural raspberry flavours and real fruit juice, Hooper’s Raspberry & Nettle is available now and is intended to sit with the existing range, which includes Hooper’s Dandelion & Burdock, Strawberry & Elderflower, Cloudy Lemonade, and Ginger Brew. The firm says the launch of the latest flavour comes after a year of significant sales increases for the brand, which is said to be showing volume growth of 245% in the off-trade.
Global Brands will be supporting the launch of Hooper’s Raspberry & Nettle with bespoke POS in the off-trade, plus PR and social media activity.