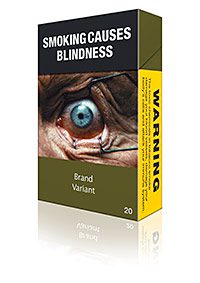 THE Westminster Government has begun its short consultation process on the possible introduction of standardised packaging for tobacco products.

If it’s decided to proceed with plain packs under the Children and Families Act 2014, which is not legislation that applies to Scotland, parliamentary procedures have already been carried out in Edinburgh which would see the tobacco pack regulations implemented north of the border too.
Late last month Westminster’s Department of Health published regulations that would enable the introduction of plain packs.
But the Coalition Government says it has not decided whether or not it will go ahead with the measure. If it does decide to do so then the regulations could be implemented in May 2016.
Westminster public health minister Jane Ellison said the government was minded to introduce standardised packaging regulations in line with the recommendations given by former consultant paediatrician at Guy’s Hospital Cyril Chantler, in what has become known as the Chantler Review.
Published in April it said that standardised packaging would result in a “modest but important reduction over time on the uptake and prevalence of smoking”.
The consultation runs until 7 August.
Opponents of the proposal have repeated their views that there is little or no evidence that plain packs would have an impact on smoking rates and rates of uptake but could harm business and aid criminals involved in illicit tobacco trading.
Colin Wragg, head of UK corporate and legal affairs at Imperial Tobacco, said: “In Australia the evidence is plain – smoking prevalence has not decreased and illicit trade has increased by 20% since its introduction, now accounting for 13.9% of total consumption.”
Daniel Torras, JTI’s UK managing director said: “No doubt the major crime syndicates across the globe are scrutinising these proposed regulations as the UK Government prepares to provide counterfeiters with a blueprint of exactly how to copy UK tobacco brands.”