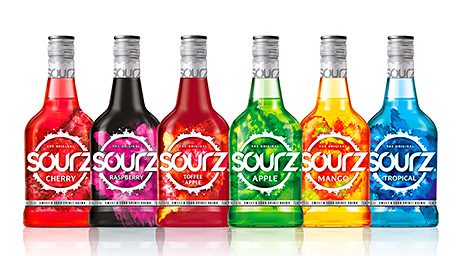 SOURZ, the young-adult spirits brand distributed by Maxxium UK, has a new look – complete with what the firm describes as a radical bottle redesign intended to embody spontaneity and fun.

The bottles include colourful skins representing the flavours in the Sourz line-up – apple, mango, raspberry, cherry, tropical and toffee apple – and feature a splash pattern.
Emma Heath, marketing controller at Sourz said: “We wanted to reinforce Sourz’ position as a fun, young-adult brand and give Sourz the standout on shelf and on back bars that a market leader deserves.
“Our design team at JKR in London reached into the core principles of Sourz and came up with the final skin design that is inspired by the hand stamps that are often seen in nightclubs. We are delighted with Sourz’s new look, which truly embodies the colourful fun and dynamism of the brand. We can’t wait to see reaction from our fans!”
The launch of the redesigned bottle coincides with the brand’s ‘This is our Summer’ marketing campaign and the national launch of its new Sourz Toffee Apple line. 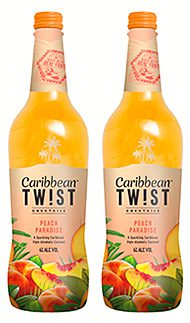 • Drinks firm Halewood International has released a new flavour, Peach Paradise, for summer for its pre-mixed cocktail brand Caribbean Twist.
The new flavour joins five established products in the Caribbean Twist range, which the firm, quoting Nielsen Scantrack figures to March this year, says currently ranks as the UK’s favourite pre-mixed cocktail brand and as the third-most popular RTD brand in the off-trade. The same figures show, says Halewood International, that in the last year it has improved volume sales of Caribbean Twist in the off-trade by 22%, with growth both in multiples (up 23%) and convenience outlets (up 68%) and that it’s the only top-three RTD brand currently in growth.
Caribbean Twist was also given a new bottle design, for all six flavours, in the range in time for summer.
RRP for all of the Caribbean Twist flavours is £2.50 for a 70cl bottle.