IT was 21 years ago this year that the Tennent’s Lager Lovelies disappeared from cans of the best-selling Scottish lager. But consumers of a certain age who want to relive some of the time they spent with Heather, Lorraine, Lee, Georgina and the other Lovelies can now take a trip down memory lane. They can even have a go at being a lager lovely themselves.

Tours of the Tennent’s Lager Brewery close to Glasgow Cathedral were reintroduced last year. But the schedule is being heavily boosted this year on the back of soaring demand and in expectation of a very busy year for the 2014 Commonwealth Games-hosting city.
Visitors hear the story of the brewery, from its beginnings in 1556, and of its most famous brand and its landmark marketing activity – everything from Bing Crosby and Morecambe and Wise ads to the Lager Lovelies, to T in the Park.
Tours will run three times a day, seven days a week during the Commonwealth Games and five additional tour guides have been employed. And visitors also get the chance to take a photo booth selfie displaying their own Lager Lovely charms on a Tennent’s can of the era. 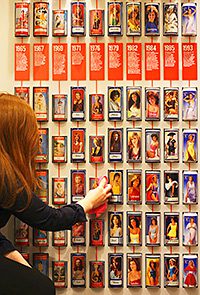