Italy v Belgium sounds like a football match taking place at the World Cup. But it’s also a contest that could very soon be a feature of your cider shelves. Cider now comes from all over the world. And the British cider industry is bullish about its export prospects. How should retailers respond to the expanding world of cider?

IT has been a recent hero of licensed grocery, with growth spurts that would put a teenage boy to shame and some sales dips too. But cider still has room for further development, according to Heineken.

The company behind Bulmers and Strongbow argues that, while there is significant interest among consumers who like to experiment with new flavours and taste profiles, the cider segment actually remains relatively small in comparison to other, more established fast moving consumer goods categories, such as beer.
“The popularity of the cider category is largely due to the rise in popularity of modern packaged ciders,” said Craig Clarkson, category and trade marketing director off-trade, Heineken UK. “However, classic cider represents more than a third of total cider category value and is growing by 9% according to Nielsen, largely driven by the Strongbow brand.”
Continuing to quote Nielsen figures he added: “Strongbow is the UK’s leading cider brand with value sales of over £261m, growing by 10.2% and three times bigger than its nearest competitor.”

With IRI identifying 22% of value growth in modern packaged ciders coming from NPD, Heineken has been one of a number of firms who have released new products and brand extensions. Recently Bulmers has launched two new lower-alcohol (2.8% abv) ciders, Five Fruit Harvest and Indian Summer. And Heineken’s new Strongbow Citrus Edge is a traditional cider mixed with lemon and lime.
And, as world ciders continue to enter the UK market, the company has added Old Mout (its name is pronounced to rhyme with fruit), which is originally from New Zealand, to its UK portfolio.
• C&C Group, which owns Magners, is also looking further afield. In March the company launched US cider brand, Hornsby’s, in the UK off-trade. Described as “cider served the American way” it has softer carbonation and is designed to be drunk straight from the 330ml long neck bottle.
Ed Shoebridge, head of customer marketing at C&C Group said: “With improvements in the economy, consumers are more open to purchasing premium products, leading to increased demand for craft and international ciders.”
C&C Group has also developed a new speciality range, Chaplin and Cork’s, aimed at what it sees as discerning cider drinkers. Somerset Gold (5.2% ABV) is a full-bodied medium cider. Somerset Reserve (6.8% ABV) is a rich medium cider.

Another of its brands, Blackthorn, has launched Black n’ Black (4.7% ABV) in response to the growing fruit cider trend.
“Fruit cider has prompted an influx of younger drinkers into the cider category,” said Blackthorn marketing manager, Andy Cross. “We knew that by adding hedgerow fruits to our distinctive Somerset cider we would create an ideal product for introducing the brand to a new audience.”
• Swedish cider Kopparberg is planning a summer of activity to emphasise the brand’s cool Scandinavian connections. The focus is on its Elderflower & Lime and Cloudberry varieties, the most quirky and Scandinavian of the range.
The £4m campaign will cover TV, outdoor, digital, video on demand, press and events such as the Kopparberg Urban Forest extravaganza.

• Glass bottled lines are the cider sector’s most important performers, according to the company behind Merrydown. Debs Carter, marketing director – alcohol at SHS Drinks, said: “The glass-bottled cider sector, in particular, has been very buoyant in the impulse sector in Scotland over the past year with sales growing by an impressive 32% in both volume and value according to Nielsen.
“There’s no doubt that flavoured cider has been the power house driving the growth in this sector over the last couple of years. Flavoured cider sales volume and value in Scotland are up by 29% and 31%, respectively, over the last 12 months, also according to Nielsen.
“Apple remains the biggest sector by volume in Scotland, but flavoured cider has already overtaken apple in value. The sector which is really struggling is pear cider which has seen sales volume and value plummet according to Nielsen.”
Carter continued: “The continued double-digit growth of flavoured ciders suggests that there is still plenty of stretch within the category. Another trend which is likely to take hold in 2014 is spirit-flavoured cider, ‘spiders’.” 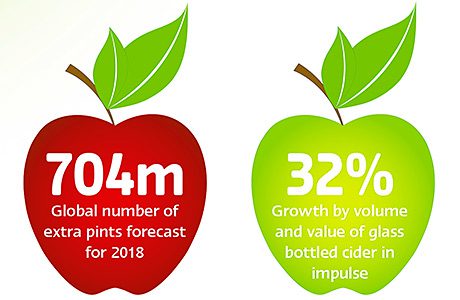 • Stella Artois Cidre has added a raspberry flavour in 500ml and 330ml bottles. The smaller bottle, expected to appeal to female consumers, is available in four- and eight-packs
The Belgian brand is said to use hand-picked, crushed raspberries to deliver what the brand owner calls “a sophisticated fruit cider with a refreshing, crisp taste”.

• The UK is leading a world revival in cider drinking, according to trade body the National Association of Cider Makers (NACM).
The organisation predicts cider drinkers across the world will be downing an extra 704m pints a year by 2018.
NACM chairperson, Paul Bartlett, told a conference in Chicago recently: “British producers – such as Aspall, Thatchers and Westons – are driving this cider renaissance forward by investing in this market and expanding the export of their product.
“In other countries, an increase in the popularity of cider can be put down to the growth of fledging cider makers, and the investment of UK producers to inform and educate consumers,” he added.