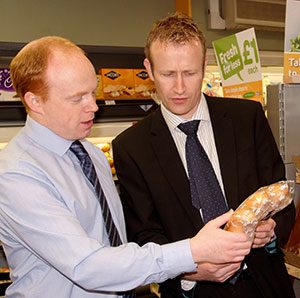 Winner: Spar, Hillfoot Road, Ayr
Bread and Bakery of the Year Award 2014 – in association with Kingsmill.

• The Hillfoot Road unit has been a Spar store for more than 25 years. It was owned by major Spar independent operator Alan Gillespie, who built a chain of 18 outlets and sold to Spar Scotland wholesaler and retailer CJ Lang in 2004.

• Kevin, who lives locally, joined after a 14-year spell with supermarket giant Asda, where he had completed management training and had worked in many departments at a nearby store and had also been part of a special regional team.

• Area manger Stuart has responsibility for a number of stores in the south-west of Scotland.

WHAT’S the secret of great bread and bakery retailing? There probably isn’t a single answer. Consistency, availability and consumer confidence in the quality of the products stocked are all important, of course. But these days it’s also very important to have the correct range, to be able to compete on price, to understand and meet local preferences and to be able to excite some interest with new products and unusual lines.
It’s quite a long list but judges in the Scottish Grocer Bread and Bakery Retailer of the Year Award, run in association with leading bread brand Kingsmill, found that the CJ Lang-owned Spar outlet in Hillfoot Road, Ayr more than ticked the boxes.
Store manager Kevin Rarity has been in his post just over a year.
He had a hard act to follow when his predecessor Lynn Boyd, now at a CJ Lang Spar in Aberdeenshire, moved last April. For the Hillfoot Road store had established a tradition of doing well in awards programmes.
Kevin has a strong background in retailing but in a very different type of store. He worked for 14 years with supermarket giant Asda.
He was known to Stuart and, with Lynn moving on, the area manager was keen to bring in Kevin, in part for his experience of another type of retailing.
“I knew Lynn would be difficult to replace and I had to think out of the box,” Stuart explained.
“Kevin had great experience in front of house, in cash, in fresh and in bulk products.”
The new store manager has certainly found differences between the two styles of shop but he’s glad he made the move.
“I had been used to being in one big department,” he said. “Here it’s all departments. It’s a local shop, you’re kept very busy, you do a lot yourself.
“At Asda it was all computer ordering, here I go round the floor. I wouldn’t want to go back.”
That being said there have been many technological developments at CJ Lang too. Bread ordering, for example, once done by phone now uses email templates which has greatly increased efficiency, new till designs have helped increase at-counter selling space and new computer systems make it easier to thoroughly analyse sales patterns.
The Hillfoot Road approach to bread and bakery illustrates CJ Lang’s food-first philosophy.
The category is located in prime position in aisle one, the beginning of a typical shopper’s path around the shop.
“As we refit stores, aisle one is all about food,” Stuart explained. “It’s about bread and bakery, chilled, dairy, fresh and grocery – making sure the first impression of a Spar shop is not a newspaper or a bar of chocolate it’s that it’s a place to buy your food.”

Bread and bakery is a key product category in the Ayr store, Kevin said.
“Especially in the first half of the day, probably nine out of 10 people are buying loose rolls, they’re Brownings rolls, we sell abut 19 dozen a day.”
Brownings also supplies morning goods, some cakes that appear on the main fixture, and fresh bakery products in the serve-over display unit at the store counter.
Wrapped bread, predominantly Kingsmill, is supplied by Allied Bakeries.
CJ Lang provides a bread merchandising planogram but bread and bakery is one of the categories where local preferences will mean the ranges are tweaked in individual stores.
The Ayr shop keeps the range quite tight, Stuart explained, its three main lines at present are the new Kingsmill Great White, a white loaf with the same level of fibre as wholemeal bread, and Kingsmill 50/50 – both of which are currently available in £1 PMP – and Everyday Soft White which is priced at £1.39. Smaller quantities of other loaves including seeded breads and Allinson wholemeal loaves are also available.
The email-based bread ordering system helps in what is actually quite a complicated category. The overall demand for bread can be quite steady, Kevin said, but promotions can see shoppers switch products quite readily.
Morning goods prove very popular as do cakes. In fact cakes are so popular they have been given extra space, which has seen Spar-branded part-baked bread moved to a free-standing display unit. One member of staff, Linda, has special responsibility for all fresh produce including bread and bakery and the Cuisine de France bake-off range. But all staff know that bread and bakery has to be checked and faced-up regularly.
The store is currently experimenting with a bake-off products dump bin close to the counter and is part of a CJ Lang trial where certain bake-off lines are baked several times a day, to be available through to 10pm closing.
The company wanted to gauge demand Stuart explained.
And, so far, evening sales of the Parisien loaf have been encouraging, Kevin said.