IF many retailers think PMPs have become a necessity when selling tobacco they’re not the only ones, most suppliers think so too. Richard Wood, shopper marketing manager for British American Tobacco in the UK explained some of the firm’s reasoning to Scottish Grocer.
PMPs are grabbing more of the market, he said. In terms of total cigarette volume, PMPs accounted for 32.1% in 2013 compared to 28.2% over the same period in 2012 . The value of cigarette PMPs in independents and symbols was greater, reaching 59.4% of total volume to in 2013 against 54.6% over the same period in 2012. 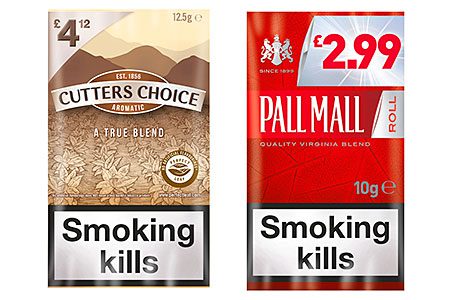 PMPs can help convenience retailers provide adult consumers with the products they want [PMPs] and encourage greater shopper loyalty because those adult smokers feel they are getting the best price, he suggested.
“And following this year’s budget, adult smokers are going to be looking for the best price on all their tobacco products; this will put PMP stockists ahead of the crowd,” he added.
BAT recently announced pack changes and range extensions for its Cutters Choice RYO range. The pack layout, including price-marking, is portrait (vertical) rather than the former landscape (horizontal) style. And added to the existing Smooth Blend and True Blend styles, was Cutters Choice Exquisite Blend, which BAT says is for RYO smokers who are looking for a richer-tasting tobacco.
PMPs can help retailers to demonstrate to their consumers that they are getting the best deal on their purchases, the firm says.“Downtrading is a trend in the tobacco industry. And, with the increased cost of tobacco products following the budget, adult smokers are going to be looking for high quality products in the value-for-money and low-prices categories to meet their needs,” said Wood.
“Rothmans, Pall Mall, and Cutters Choice all meet this need, and with a price-marked pack, you can prove it to your adult smokers – that puts stockists of PMPs ahead of the crowd.”
Value products such as Pall Mall, Rothmans Value and the growing RYO category, account for a high proportion of PMP tobacco volume, the firm says. But BAT suggests retailers should also consider incorporating capsule cigarette products into their PMP ranges. That would offer the adult consumer what BAT sees as “the right balance between choice and value.” The whole Pall Mall range will continue to be available in PMP and plain packs.