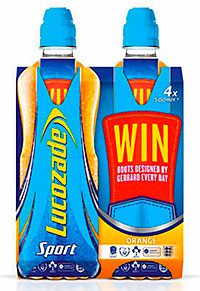 As part of the brand’s ongoing Fuel to Rule campaign, consumers have the chance to win one of 60 pairs of football boots designed by the midfielder each day of the promotional period.
The activity went live on 14 April and runs for nine weeks across the full Lucozade Sport range, and is being advertised specifically on Lucozade Sport Orange & Raspberry single and four-packs.
The firm says Lucozade Sport is currently worth £102.1m and growing by 8.4% year on year. As well as Steven Gerrard, Lucozade Sport’s Fuel to Rule campaign is also supported by other sports stars including Gareth Bale and Katie Taylor.