PREMIER Foods is shaking up the seasonings market with three ready-mixed flavour combinations.
OXO Shake & Flavour is designed to appeal to consumers looking for a quick way to flavour their cooking.
The three flavour mixes are Chinese, Southern Fried, and Chicken Tikka.
Although the product range launched in September last year, the three new additions only became available last month.
Premier says a TV advertising campaign and in-store support will back the brand later in the year.
The company says that after four months the Shake & Flavour range has delivered over £750,000 in sales. 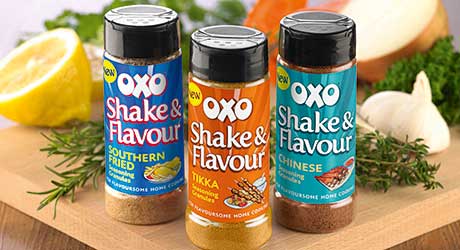