Traditional round cakes are showing decline, under pressure from individual treats. Breakfast biscuit sales are soaring. 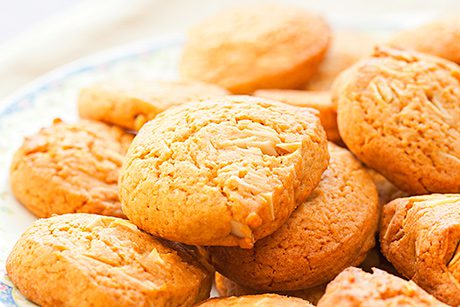 BISCUITS and cakes form an established part of the culinary and consumer landscape of Scotland.

But it’s not the easiest of commercial times for the category. Market analyst Key Note’s Biscuits and Cakes Report 2013 says that while overall biscuits and cake sales value grew by 4.4% in the UK in 2012, the rise was principally down to price inflation. And sales and volume performances varied considerably.
There were clear winners and losers and the growth of a few of the category’s stars, such as Belvita breakfast biscuits, could, the report suggests, be seen as hiding long-term problems of a saturated market where the biggest players are reluctant to commit to serious investment in new product development.
The traditional round cake is in decline under sales pressure from individual treats, cake slices and cake bars. The continued trend for home baking has also taken a slice out of store sales of traditional cakes.
But savoury and healthy biscuits and crackers and crispbreads are performing well, as hard-up consumers pack their own lunch and snacks and seek out alternatives to bread and crisps.
Mondelez International’s Belvita, launched in the UK in 2010, has transformed the biscuit sector. It was the fastest growing brand in 2012 making it, according to Key Note, “the most successful brand in the total biscuits and cakes market in the UK”.
An extensive ongoing marketing campaign – that included £1.8m spent on advertising in 2012 – has persuaded the public that a biscuit can be a healthy and convenient breakfast, ideal to eat on the go or while commuting. The brand this year reached a value of £50m. Researchers attribute part of the success to the launch of three new varieties at the start of the year.
Perhaps not surprisingly other biscuit manufacturers and food firms are keen to jump on the breakfast biscuit bandwagon.
United Biscuits launched McVitie’s Breakfast, Premier Foods brought out Hovis Bakes while Kellogg’s extended its existing All-Bran and Nutri-Grain ranges to include breakfast biscuits. Quaker Oats and Weetabix also joined in with Oat So Simple Breakfast Biscuits and Weetabix On the Go.
But elsewhere in the category, NPD has been thin on the ground.
“Manufacturers have continued to invest in different variations of existing products,” the report said.
Examples of those range extensions have included giant Jaffa Cakes, Fox’s Mini Party Rings, Mr Kipling Mini Classics and Oreo Snack Packs.
Special editions for holidays and special occasions – Valentine’s Day and Mother’s Day as well as Halloween, Christmas and Easter – provide another way to get extra marketing miles from established brands.
Key Note said: “The aim behind this innovation is to boost sales during celebrations to make up for falling volumes the rest of the year.”
And they’ve been trying to increase the number of “occasions” when biscuits are consumed. Use as part of a packed lunch has increased, which Key Note sees as one of the factors behind the growth in popularity of healthy biscuits and of individual cakes and pies. The researchers suggest that 17% of all biscuit consumption is now as part of a packed lunch.
The make-your-own lunch trend could be a factor also in the growth of savoury biscuits, a buoyant category where value increased to £103m last year, and crackers and crispbreads – where value grew to £332m.

United Biscuits’ brand Jacobs launched its snack pack Oddities in March and by the end of the year it was worth £7m. Key Note suggests such bagged biscuits snacks are bought as alternatives to crisps.
Elsewhere the big brands have felt the pinch as consumers economise by buying own-label products. Sales of 14 of the top 20 biscuit brands, including Hobnobs, Jaffa Cakes and Kit Kat, dropped in 2012. And in place of the multi-buy deals that increased volume in the past, last year saw more manufacturers and retailers using straight price promotions.
But on the other hand manufacturers have also, according to Key Note, pushed prices up, which has hit volume, shown to be down 2% for biscuits and 3.5% for cakes.
Reduced-fat and reduced-calorie biscuits have lost out, as health-conscious consumers now appear to prefer to limit their intake of regular treats instead of buying alternative products. The health-driven trends are now for gluten-free, natural products, and lines without added sugar, artificial colours, flavours or preservatives.
Chocolate biscuit bars, with a value of £404m and a 16% share of the total biscuits market in 2012, saw that share drop by 0.7% in the last year. Key Note observed that sharing bags of confectionery are one of the products stealing market share from biscuits and cakes.
Specific children’s biscuits fell in value by 3.9%, to £98m, possibly because health-conscious parents are looking for alternative treats, and shoppers generally are buying products that will suit everyone in the family.
Cakes sales fell by 2.2% in 2012, Key Note says, having been hit by the continuing trend towards home baking, either from scratch or from packet mixes. That meant that the share of the biscuits and cakes category taken by cakes was lower than before, at 35.4%. A lack of NPD from cakes brand owners has not helped, according to Key Note.
Within cakes, individual cakes, cake bars, pies and tarts make up 78% of sales. Cake slices rose by around 15% in value, single portions were up by almost 60% while cake bars were up 3.5%.
Last year cake and biscuit brands spent £34.6m on main media advertising, up 17.6% on 2011. Oreo was the most-advertised brand in the sector, with Mondelez spending £2.7m to keep the cookies in the public eyes. To compete with Belvita, Kellogg’s spent £1.6m promoting Nutri-Grain breakfast biscuits. In fact the expansion of the breakfast biscuit market meant ad spend on brands in the sub-category almost doubled between 2011 and 2012.
For the future, Key Note sees the increase in snacking and the need for affordable treats as promising signs for the category. The market will continue to increase sales value over the next five years, but that will be driven by price inflation rather than by increasing demand. Growth areas are expected to include “impulse” biscuits and cakes, individual and miniature formats for instant eating; more seasonal products; and healthier ingredients such as natural sweeteners, dark chocolate and real fruit.