SHOPS in South Lanarkshire and Glasgow were targeted last month when more than 40 officers from HMRC, South Lanarkshire Trading Standards and Police Scotland seized illicit alcohol.
In total 1,570 litres of beer, 1,880 litres of wine and 1,282 litres of spirits were seized during the day-long operation. It was the latest in a programme of swoops on retail premises which began in April and has since seen alcohol seized in Edinburgh, Renfrewshire, Midlothian, Inverclyde and North Lanarkshire.
Chris Brett, HMRC’s Alcohol Taskforce manager in Scotland, said: “We are tackling excise fraud at all points of the supply chain, from production and storage through to sale. Anyone engaged in handling or selling smuggled alcohol should be aware that HMRC teams are active across Scotland.” 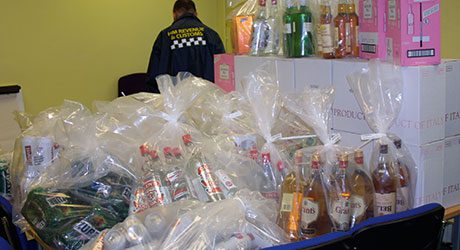