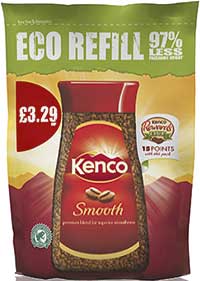 MONDELEZ International has combined a move to instant coffee refill packs with a PMP across its Kenco range. According to Nielsen, refills are growing at 54% per cent year-on-year, compared to 0.3% for jars. With nearly half of shoppers walking to small stores, according to Kantar, Mondelez argues that the lower weight of Kenco Refill packaging makes sense: it’s 87% lighter than an equivalent jar.
The PMP range includes a 100g price-marked pouch of Kenco Rich, Smooth (£3.29)and Decaff (£3.59) plus an 85g PMP of Millicano (£3.29).
Mondelez trade communications manager Susan Nash said: “Instant coffee refill packs are performing very strongly and these convenience-specific PMPs provide a great opportunity for independent retailers to get a part of the action.”